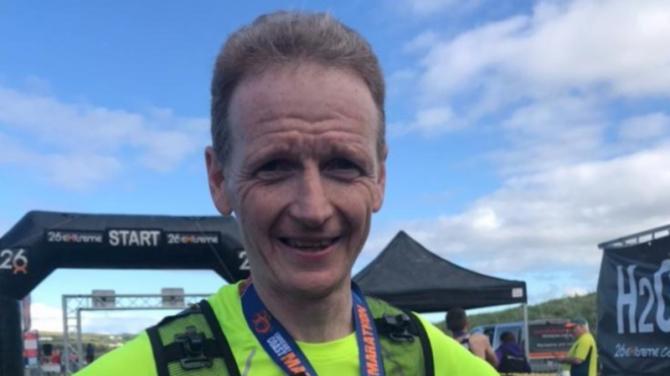 While many runners enthusiasts are taking part in the 'virtual' Omagh Half Marathon, one Loughmacrory man is setting his sights much higher than the 13.1 mile distance.

To celebrate his 55th birthday, Omagh Harriers’ Niall Heaney has set himself the astonishing goal of running 55 miles in support of Chest Heart and Stroke NI and Marie Curie.

“It will be tough, and Joe’s Hill will be a tight one in particular,” said Niall.

“I would like to do it in under 12 hours but it might depend on the weather. If it’s hot like it has been, it may take longer.”

Niall has already raised over £900 for his chosen charities and there are two people close to his heart who are providing inspiration.

He lost a close family friend in Margaret Conroy to cancer and a number of years ago, his father-in-law, Pat Mullan, suffered a stroke and sadly died while out for a walk with Niall’s children, Aoife, Niamh and Dervla.

“It was an extremely difficult time,” said Niall. “The children were very young and my eldest girl was only eight. He had only taken them for a walk up the field behind the house.”

Niall said both charities had helped his family in the aftermath of their deaths.

“At this time charities need all of the help they can get,” he continued. “Shops are closed and there are very few fundraisers going on, so now is probably the best time to do it.”

There is no doubt that Niall will have plenty of support on the day and it is his family and friends who will help him complete this extraordinary achievement.

He is already looking forward to the last five mile loop when all four daughters, including Maeve, will run alongside their inspirational father.

Meanwhile, anyone who had signed up to complete the Omagh Half Marathon at the end of March can still receive their medal by completing a virtual race by the end of the August.

“Because of these exceptional times, the rise of virtual races has been a fantastic way to motivate runners to stay fit and every virtual runner will help ensure we can make a good donation to our charity partner, the Air Ambulance NI,” said race director, Michael Ward.

“The decision to go virtual wasn’t a difficult decision and we have offered those who had pre-registered a number of different options.

“They can complete the virtual run which is the next best option, the entry can be deferred until next year or they can receive a refund or donate their entry fee to the Air Ambulance.

“Runners don’t have to do the actual Omagh Half Marathon route, we won’t be monitoring whether they do it in a specific time. Even if they want to complete it over two different times, then that’s up themselves because obviously there hasn’t been the opportunity to train with the same intensity as would usually be the case.”

* To donate to Niall’s cause, please search Niall Heaney on Virgin Money Giving.