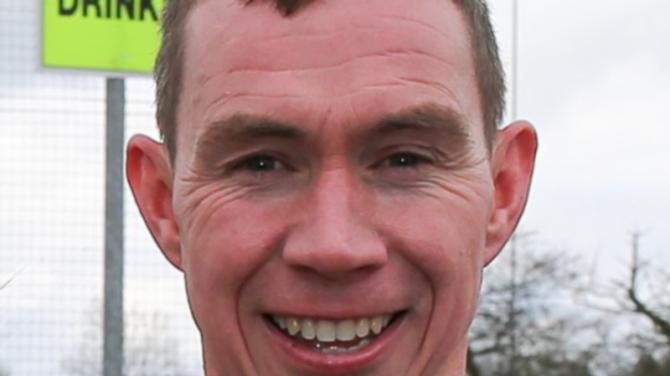 At the beginning of the year - before Covid-19 had ever been mentioned on these islands - Carrickmore man, Michael Kerr, had been eagerly anticipating October.

Michael had achieved a wonderful personal best at the Dublin Marathon in 2017 and had felt 2020 was the year he could break his record of two hours and 54 minutes.

However, coronavirus put paid to his plans for Dublin, and the rescheduled Larne Half Marathon he had signed up for was cancelled for the general public due to the global pandemic.

But Michael is a determined individual and he had already made his mind up - he would take part in a race this year - on the local, and undulating, roads of Carrickmore.

"During the period of lockdown, I was personally inspired by the many challenges other runners had set themselves and completed, no more so than my good friend Declan McDermott and his challenge of 100 days of consecutive running before his 40th birthday," said Michael.

"During lockdown, my wife Sinead and I continued to train each week on our local roads in the townland of Innishatieve which has a bit of everything, from hill reps, good straights and testing tempo runs.

"Once it became clear that Larne wasn't going to happen, I decided I would have to set myself a new challenge, so I decided to run a marathon and to do it on the roads I train on on a Sunday in Innishatieve.”

Although Michael had been training each week, the furthest he had ran was shorter than the half marathon - 12 miles.

But he built his endurance up gradually and on Saturday, September 5 - three weeks before he would take on the 26.2 marathon distance - he ran 16 miles over the hilly route of his townland.

A week later, he upped his mileage to 21 on a flat course and the following week he ran another 14 miles.

“I was confident I would be able to run around seven-minute mile pace - or just under - to get a time of three hours.

“I knew that my fitness was reasonably good, despite having missed training during the month of May after breaking my wrist and being in a cast for five weeks.

“The only doubts I had was doing the marathon without all the supporters you have right along the route during Dublin. I wondered how it would effect me mentally.”

But Michael should have had no worries.

Starting his run at 7am on Saturday morning, Michael, thanks to the support of his family, friends and neighbours, took just under three minutes off his personal best to finish the marathon distance in a remarkable time of two hours and 52 minutes.

“Sinead was there every three-and-a-half miles with water to keep me hydrated,” said Michael.

“As I started to eat into the miles, I was delighted to see many neighbours and family members out in different places along the route to give me tremendous support and encouragement.

“I deliberately didn't look at my watch in regards to time but just to check on the distance.

“As I made my way over 21 miles, I began to feel mentally tired, but the shouts of encouragement from Sinead and our kids kept me going, and as I crossed the finishing line I looked at my watch and to my great amazement I had recorded a new personal best of 2.52.27.

“It would definitely not have been possible without Sinead and all the support from family members and neighbours on the day.”