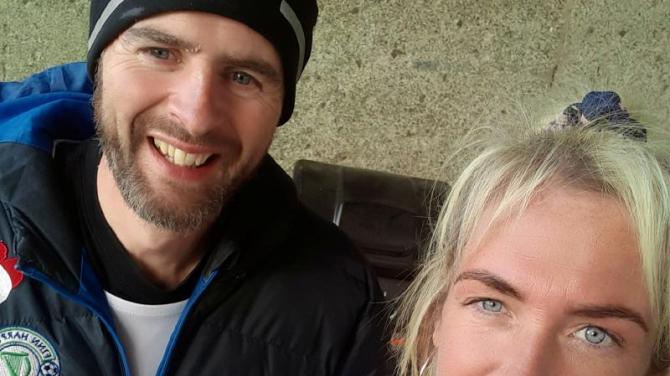 AN Omagh endurance runner has broken a new Irish female record. Jill McCann ran a barely believable 133 miles between Saturday afternoon and Sunday night in a time of just under 32 hours, beating the previous record by just two minutes.

The incredible Jill was one of just five athletes from West Tyrone who had the honour of representing Ireland at the ‘Big Dog’s Backyard Satellite World Ultra Championship’ at the weekend.

Omagh’s Richard Shannon, Neil McSorley, and Donna Owens and Marty Hagan, from Fintona, were also part of the 15-person national team in what was essentially a last-person standing competition.

Competing against 25 other nations from all over the world, participants ran a 4.2-mile loop on the hour every hour until there were only two members of the team left.

“It was the hardest ultra race I’ll ever do, physically and mentally,” said Jill.

“It was all team work, we just kept each other going.”

Jill said to be selected to represent Ireland was “mind-blowing”.

“It was something I always wanted to do ever since I started to run,” she said.

“I never thought it would happen. I received the call about six weeks ago and it was surreal.

“It’s a weekend I will never forget. Plus the pain I’m in now, it will be difficult to forget!” laughed Jill.

The longest Jill had ever ran in a previous last-person standing event was 25 hours, earlier this year at Castleward.

“I always wanted to break the 30-hour mark,” added Jill.

“My team members kept reminding me that I would break the record if I kept going, and only for them I wouldn’t have.

“I had to run my legs off to make the record. You can imagine after 31 hours and 50 something minutes of running that I didn’t have much left to give. I had to work hard for it.

“I made it in and nothing more, I think I only had about two minutes to spare.

“It hasn’t really sank in just yet.”

Meanwhile, Omagh man Richard ran an incredible 125 miles, finishing up on Sunday evening at around 7pm.

“Crazy and all as it sounds, this is what we do!,” Richard laughed.

“I’m delighted. I will learn and I will go again.

“You could kick yourself in another day or two that you should have done another couple of loops.

“But I’m more than happy and hopefully I’ll get another chance to go at it again.”

Richard had been running a steady pace, completing the 4.2 miles in 50 minutes to give him 10 minutes to grab a quick snack and a brief rest.

“Each loop eventually grinds you down,” he said.

“The last few were getting hard and harder, and the legs were getting sore. You dreaded sitting down because you knew it was going to be a struggle to get up again.

“There was all different terrain as well. You’re running on tarmac, there was trail. There was a part of the course that really pulled the legs out of you.

“The event has been a huge success and hopefully we will get another opportunity to do it again.

The Irish winner was Ed McGroarty from Raphoe, but the fact there were five representatives from this part of the world is indictative of the spirit of the people of West Tyrone.