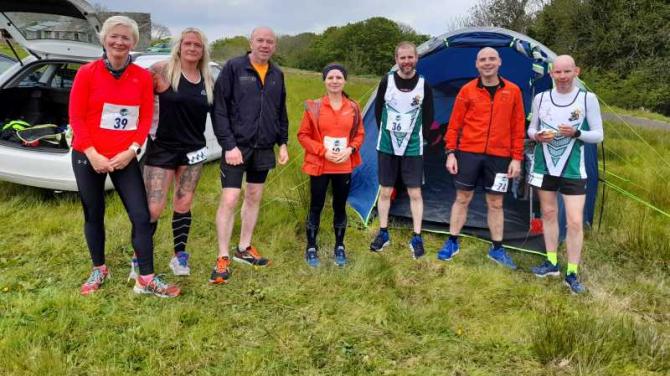 FOUR Omagh athletes made up a six-person team to take part in a gruelling 'last person standing' ultra-running competition at the weekend, with the local runners chalking up an amazing total of 390-miles.

Jill McCann and Richard Shannon were joined by Terry Canning and Trevor McFarland in a team they named 'Easier Said Than Run' for the Last One Standing event which took place at Florida Manor, Comber.

The competition started at 12 noon on Saturday and runners had one hour to complete a 4.2-mile loop. Any runner who was not finished inside the time limit and at the start line ready to run again was disqualified. This happened every hour until there was only one runner at the start line.

Any competitor still in the race 24-hours after it started having completed 100.8-mile received a medal.

This exact distance was met by the super talented Jill. Richard made 105-mile as did Terry who, remarkably, had never completed such an excruciating distance before. Trevor chalked up a very respectful 79.8-miles.

The team - also consisting of Andrea Kennedy from Enniskillen and Aaron Johnston from Antrim - claimed a runners-up medal for their heroic efforts.

Speaking after the event, Richard said the terrain proved challenging.

“This was the fourth time I have ran over 100-miles and to be honest, this was the most difficult one yet,” he added.

“I was happy to get to the 100-mile distance, but it was more about helping the other team members because two of our group had never run that distance before, and Andrea had never run more than a marathon. She only committed to the event three weeks ago.

“It’s all about endurance; not speed. We kept each other going.”

Terry, whose furthest run prior to the weekend’s event was 62-miles, said he wouldn’t rule out taking part in a similar event in the future.

The Omagh Harriers member added: “It was certainly different from what I’m used to. The nutrition was the most challenging aspect; I’m not used to eating while running. The tiredness didn’t bother me too much.

When the sun appeared and the heat was turned up a notch, Terry realised he couldn’t continue.

But he is very proud of his achievement - and rightly so - even if getting up and down the stairs in his house is a real challenge at present!

“Making the 100-miles for the first time is great, and I have to give Richard credit because if it wasn’t for him I probably wouldn’t have done half of the training!”