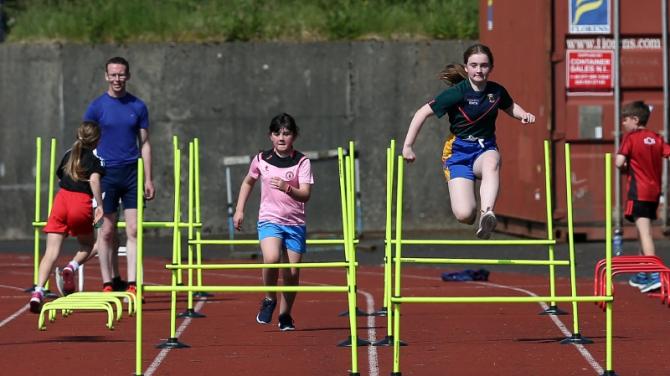 YOUNG athletes have been developing their sprinting speed and power at Youth Sport Omagh over the last number of weeks.

Every Monday, the group Sprint Academy Ireland have been holding group sessions for young people at the Omagh venue where they have enjoyed top class coaching from Trevor McGlynn and Mark Brearty, of Omagh Harriers.

Around 35 athletes from various sports have been taking part and as speed is such an invaluable skill in a match setting regardless of the sport, the training is proving invaluable.

“Speed is the most important part of all sports,” said Trevor.

“If an athlete can get to the ball two metres ahead of their opposition in a match, it gives them so much more time to do something with it.

“Everyone can run, but most people cannot run correctly. By tweaking a few things, such as readjusting the position of their hips, arms, elbows and hands, it can go a long, long way to improving their speed.

“We will test your speed, distances, while working on plyometrics. It is high explosive and specific training. Everything is short and fast.

“There is also a bit of fun and some games as well for the participants to enjoy.

“We have a lot of athletes from various clubs and the programme is open to schoolchildren aged primary five, six and seven, as well as secondary school pupils.

“We are also working on a programme for adults aged 16 and over.”

It is now their intention to start a new four-week block session in Strabane later this month.