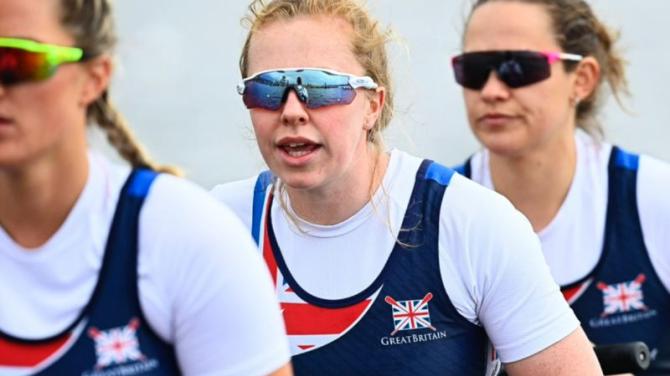 AUGHNACLOY’S Rebecca Edwards has her sights set on Olympic gold after she was named in the Great Britain rowing squad for the Tokyo Olympics.

The 27-year-old was named in the squad alongside Northern Ireland’s Rebecca Shorten and Hannah Scott.

This summer’s Games will be a first Olympics for the trio.

There are 24 women in the 45-strong GB squad, which includes 37 Olympic debutants.

Edwards made her senior debut for Great Britain at the third World Cup in Rotterdam two years ago in a second development GB eight that finished seventh overall.

“It means the world, it really does,” an emotional Edwards said in reaction to her selection.

“I have wanted to be an athlete my whole life, I guess I wasn’t sure in which sport. I have always enjoyed being part of a team and working together to be so much more,” she told the BBC.

“I could never do this on my own, when I am rowing I feel like it is more than just me. Particularly for female athletes and young girls in Northern Ireland, I always wanted others like me to know you can compete at the highest level.

“I started out playing football at my church and wanted to be this athlete, but I thought ‘there is no way, how can I get there?’, but you can. That means a lot to me and I would like to think there are young girls sitting at home thinking ‘if she can do it, there is nothing stopping me’.

“I’m nothing special, I just took my chances and worked hard - that is all that it is.”

Edwards took up rowing while studying French and Spanish at Queen’s University. She moved to England in 2016 and is a member of the Leander Club, one of the oldest rowing clubs in the world, and the oldest non-academic club. It is based in Remenham in Berkshire, England, and adjoins Henley-on-Thames.

They were postponed last year because of Covid.

Japan is currently dealing with a fourth wave of coronavirus cases.

But earlier this month, Tokyo 2020 president Seiko Hashimoto said she is “100%” certain the Olympics will go ahead, although she warned the Games “must be prepared” to proceed without spectators in the event of a coronavirus outbreak.

No international fans will be permitted this summer at the Olympics or Paralympics.

Hashimoto said it was a “very painful decision” to have no overseas spectators present, but one necessary to ensure “a safe and secure Games”.

“[For many] athletes it’s a once-in-a-lifetime opportunity that they can compete in the Games. To not be able to have family members and friends who have supported them all along must be a very painful thing and that has caused me pain too,” she said.