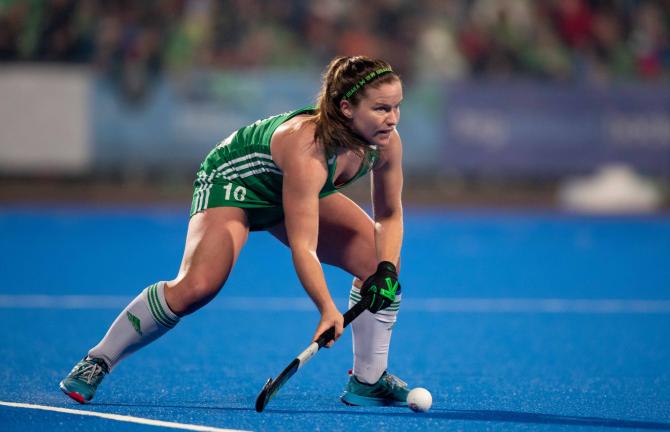 DRUMQUIN native Shirley McCay has decided to call time on her international career following a ground-breaking 14-year spell with the Green Army.

Since making her international debut in 2007, the Drumquin native has gone on to play for 316 times, a caps record for both hockey and for female sportswomen in general in Ireland.

A diminutive defender with an eye for a glorious long pass, a teak-tough competitor willing to contest every opponent and situation, her passion and perseverance stand her out as one of the iconic faces of the Green Army’s rise.

A rise which has brought them from obscurity to the world’s elite levels, a journey culminating in the 2018 World Cup silver medal and a maiden appearance for the Irish women at the Tokyo Olympic Games.

While she has dabbled with the idea of retiring on a couple of occasions in the past few years, she feels the time is right following the Olympics for her to step back and “go all in” to guide the next generation of stars through her work as an Ulster Hockey performance coach.

Her beginnings in the sport came at Omagh Academy, picking up the basics of the game in jig-time, breaking into the senior team at the school when she was just 14. She would be a guiding light in Omagh’s sole Kate Russell All-Ireland Schoolgirls success in 2005.

Omagh Hockey Club soon came calling, “loving life” on the fourth team and enjoying the ride up through the teams before giving some of Ulster’s big guns a run for their money.

There, her development was overseen with Anne Buchanan, Iris Nelson and June Graham crucial figures who became almost ever-present supporters at European Championships – eight in all – among other competitions.

It helped propel her to new heights on the club front, first with Randalstown and then with Ulster Elks – with whom she would win two Irish Senior Cup crowns – KHC Dragons in Belgium, Old Alex and then to Pegasus where she became an EY Champions Trophy winner.

Gene Muller invited her onto the international stage at the age of 18 for a series in Stellenbosch in January 2007. Since then, she has been virtually ever-present, missing just 37 of Ireland’s capped games in 14 and a half years.