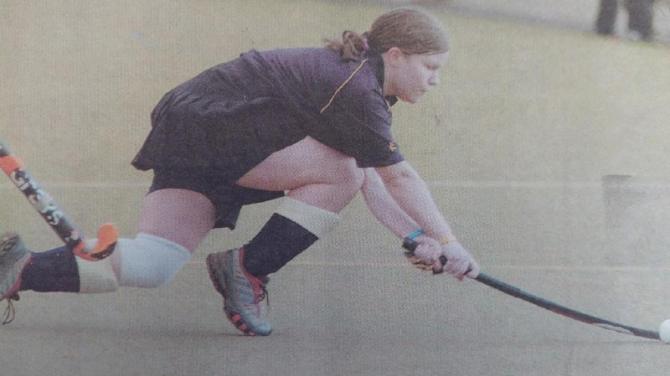 EVEN as a 14-year-old pupil at Omagh Academy, there was something that little bit different about Shirley McCay.

She was younger than the rest of her teammates, to begin with, but her age and inexperience wouldn't stop her from breaking into and becoming an established member of the senior team.

Mary Swan, the then head of Physical Education, sensed the team could benefit from Shirley's tenacity, dogged determination, will to learn, unquestionable commitment - and her raw talent.

It was these qualities that made the Drumquin girl an integral member of the history-making Omagh Academy team that caused a huge upset by winning the Ulster Senior Schoolgirls' Cup and the Kate Russell All-Ireland Schoolgirls Cup in 2005.

Not prepared to rest on her laurels, such success would only whet her appetite for more.

Shirley would dedicate herself to the sport, working relentlessly to improve, and when she joined Omagh Hockey Club's fourth team, it wouldn't be long until she was battling some of the biggest clubs in the province with the firsts.

"Shirley has always been a very warm-hearted, genuine person, but she always had that competitive spirit in abundance and had the desire to go that step further - to play for Ireland," said Mary.

"I knew Shirley was different. When we won the cup, someone of influence within hockey told me: 'That wee girl will play for Ireland'. I wondered what he had seen in her that I hadn't actually seen at that stage.

"I knew that Shirley was good, exceptional, in fact, but then where would the drive come from to give that extra commitment and build on that? That was down to her family background and Shirley's ambition.

Mary watched on from the stands with her heart full of pride as Ireland made the World Cup final in London back in 2018.

"It was one of the best sporting experiences of my life, watching Shirley achieve that having known her from a wee girl," said Mary.

"It is absolutely wonderful all that Shirley has achieved and she has the rest of her life now to look back on all the friends she's made, the countries she has been to, and all of the achievements she has.

"I'm extremely proud of her. Proud is hardly the word. As her ex-PE teacher and hockey coach, I have got so much from her career - so many trips and my heart rate was up to 200 watching her in hope that she would win.

"Shirley was also a great footballer; she was exceptional at most sports she was involved in, and she chose hockey.

“Shirley is now and always will be an Olympian, an honour only few manage to achieve.”

“I wouldn’t have got into hockey if it wasn’t for my experiences at school,” said Shirley.

“Mary Swan was a huge influence at Omagh Academy. I loved to play hockey at school and I then got involved with Omagh Hockey Club. I loved it there!

“That’s where it all began really and my career wouldn’t have been possible if it wasn’t for the Academy and Omagh Hockey Club.”

Shirley looks back on what she achieved at Omagh Academy with great pride.

“We had a rich couple of years and we had some very good players at that time - the likes of Grace Moffett, Amy McFarland and Kathryn Elkin. We all gelled well and thankfully we managed to achieve some success.”

Omagh Academy were huge underdogs in their quest for All Ireland success in 2005, but with Shirley as their leader, anything was possible.

“We hosted the tournament at Youth Sport that year,” Shirley recalls.

“It was a brilliant experience; we all had the time of our lives. We beat Alexander College - a Dublin team - in the final and there were a few of the girls in that team who I went on to play senior international hockey with!

“It was good to show that the so-called ‘smaller’ teams could go out and perform on the big stage.”

“That all paved the way for the future,” Shirley continued.

“It brought out our competitive spirit and our want to win. We always strived to be better.”

Shirley distinctly remembers Mary telling her not to worry about a Saturday job and just to focus on her hockey.

“She taught me just to enjoy my sport and I’ve forgotten that. Thankfully I was able to catch up with her recently and it’s always great to have a chat with her and reminisce.”

After a record-breaking 316 caps, a World Cup runners-up medal and an Olympics appearance, that proved to be invaluable advice.