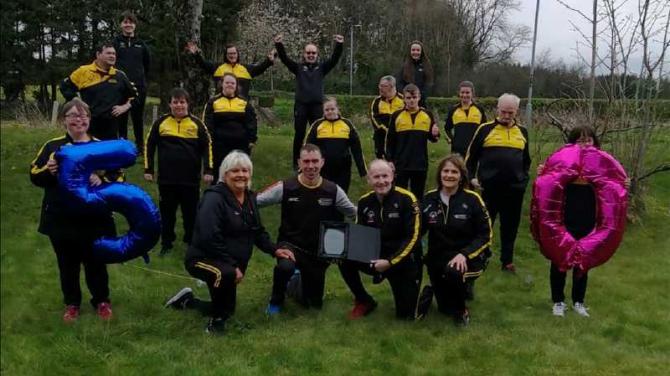 A FUNDRAISING initiative by local athlete Michael Kerr, who ran 50k for Carrickmore’s Starbreakers Special Olympics Club, has generated over £10,000.

The total has surpassed even the wildest expectations of the local club.

This ambitious task and most generous gesture was the brainchild of Carrickmore native Michael Kerr. He proposed to singlehandedly undertake a 50K run on May 1 to raise money to support his local Special Olympic Club, Starbreakers, which depend wholly on fundraising to continue their wonderful work with special needs athletes.

Michael undertook a disciplined and challenging training plan undertaken prior to the event.

Starbreakers members and volunteers were on board immediately with Michael’s proposal and were only too happy to support him.

They began their job of raising awareness of Michael’s mammoth effort and encouraging people to donate via the JustGiving fundraising page.

Starbreakers were amazed from day one at the generosity and support that Michael duly received.

The first day of May dawned and as Michael undertook his challenge of 50K there was a carnival atmosphere at the Milestone Centre, Carrickmore where supporters gathered to support him as he ran past approximately every 15 minutes or so.

The steady stream of people who came to cheer him on and leave generous donations exceeded expectations and, on the day, there was £6,345 collected, and a further £5,286.27 donated via the JustGiving page making an impressive total of £10,632.27.

The superb support and generous donations given are a fabulous reflection of the Carrickmore community at its best and proof that a single act of kindness such as Michael’s has a lasting power to transform the lives of the Starbreakers athletes.

Starbreakers would like to sincerely thank and formally acknowledge their appreciation to Michael, his family, and friends, all who generously donated and offered their support in so many ways before and after this fantastic event.

A spokesperson continued: “We promise to spend this money wisely, and with it, Starbreakers will continue providing all year-round sports training and athletic competition in a variety of Olympic-type sports for children and adults with intellectual disabilities, giving them continuing opportunities to develop physical fitness, demonstrate courage, experience joy and participate in a sharing as is the overall Special Olympics mission.”