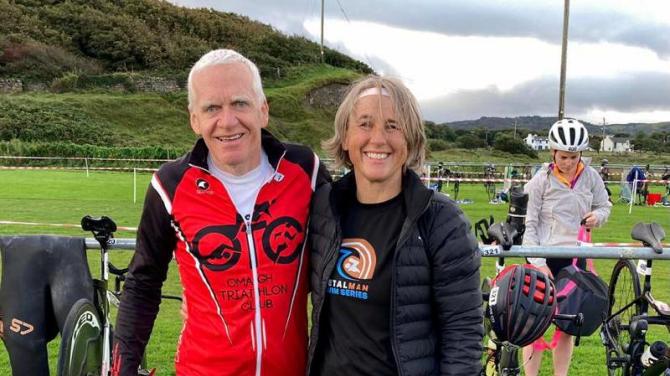 SATURDAY in Westport, County Mayo, was the scene for this year's National Standard Championship race.

Representing Omagh Triathlon Club was the formidable duo of Gerard Turbitt and Cathy Cunningham, both who are seasoned campaigners in the National Series.

The race started with a single loop 1500m swim in Clew Bay from Westport Quay. From the start whistle both Cathy and Gerard set the pace in their category, strong swimmer Cathy was out of the water in a savage 25.20 with Gerard also setting a great pace with a 28.35 split.

The 40km cycle would take them from Westport out and back towards Louisburgh on a rolling road with a few drags thrown in for good measure. Again, storming away from her competitor Cathy really put the pressure on with an average pace of 33.7km/hr to return back in Westport almost 10 minutes faster then her nearest rival on 1:06:38. Gerard lost almost a one-and-a-half minutes to his nearest rival on the bike but was still in control with his brilliant 1:13:25 split.

Not being complacent, Cathy after lacing up the running shoes, flew around the course in 49.00 - again nearly two minutes ahead of her nearest rival. Ever the strategic mastermind Gerard completed the run also in 51.51 to make sure he had secured top place in his category.