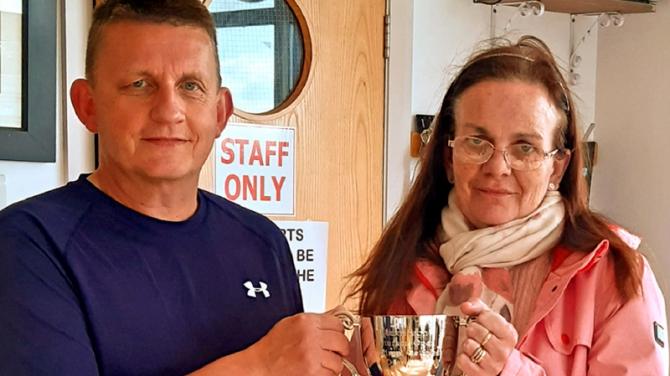 A FEW downpours and the odd hail shower did nothing to dampen the spirits at the Fermanagh Open Veterans Tournament hosted by Irvinestown Lawn Tennis Club at the Bawnacre centre courts from September 28 to October 3.

More than 90 players from across the country participated in 23 events which ranged across different standards in over 35 through to over 65 age groups, in singles men, ladies and mixed doubles.

The event was sponsored by APC Mechanical Contractors, Lisnaskea and by Fermanagh and Omagh District Council whose chairman Errol Thompson visited on Saturday afternoon and stayed to enjoy the high standard of play, plus the hospitality provided by George Beacom, Bawnacre Centre manager and his staff.

Mr Thompson paid tribute to John Maguire, the tournament director and the Irvinestown Lawn Tennis Club committee members who worked hard to stage this prestigious event and, in adherence to Tennis Ireland and FODC covid regulations, ensured that it could be safely enjoyed by the competitors.

Players at the rournament were surprised and delighted on Sunday when two members of the winning Northern Ireland ladies international football team - Melissa Callaghan, captain, and team member Claire Carson - visited the courts to watch some of the finals and say a few words.

The chairman of Ulster Branch Tennis Ireland, William Noteman, who also participated in the tournament, expressed his appreciation of the effort which had gone into organising the tournament and referred to the high standard of play on superb courts.

John Maguire, tournament director thanked the sponsors, APC and FODC, his team of helpers, George Beacom and Bawnacre staff and particularly the players, many of whom who had travelled a considerable distance to take part in the event and referred to the spirit of friendship and camaraderie which sat easily alongside the competition on the court.

The Over 65s Men's singles was won by Omagh stalwart, Stephen Cuthbertson, the runner-up was Enniskillen's Christopher Cieplucha, while Irvinestown's John Maguire secured the win over Gerry Clarke (Letterkenny) in the over 60 men's singles.

In a closely fought match, Steven Leeman (Hawarden TC) took the over 50s singles win from Gelmuda Grzegorz (Ballycastle TC) and went on to secure wins in the over 50s mixed doubles with club partner Jennifer Lyall and over 45s mens doubles with partner William Noteman, (Belfast Boat Club).

Success came for local club members when Kathleen Maguire (Irvinestown Lawn TC) partnered Doreen Jones (Donegal Club) to the win in ladies over 55s doubles. Kathleen was also runner-up in the Ladies over 55s singles, which was won by Aoifin Shorten (Sligo LTC), while Doreen and partner Conor McKeown (Omagh LTC) secured the over 35s C doubles win. Conor also took the men's over 35s C singles title when he beat Ralph McCurry in the final.

John Maguire flew the flag for Irvinestown Lawn TC again when he and partner Godfrey Gaston won the men's over 55s doubles.

It was a poignant moment when Omagh players Cliff Worley and Karen Acheson won the over 50s C mixed doubles 'Brendan McGuinness Memorial Cup', sponsored and presented by Sheena McGuinness, in memory of her late husband - a long-standing member of ILTC who had always enjoyed mixed doubles in Irvinestown and neighbouring clubs’ tournaments.

Newcomer to Irvinestown's tournament, Hilary Kilcawley (Sligo TC), battled magnificently with Orla Malone Cavan TC to secure the over 45s ladies singles title, while Jennifer Lyall (Bangor TC) had a similarly epic battle with Vanessa McBrien (Enniskillen TC) to take the over 50s ladies singles win. Jennifer went on to partner with Ailbhe Atkinson (David Lloyd Club Belfast) to a win over the Enniskillen pairing of Martina Boyd /Sonja Hateboer in the over 45 ladies doubles event.

Francis went on to take the over 35s men's singles title and was presented with the Josie Patterson Memorial Cup, sponsored by Aidan Curran of the sponsor APC.

In his victory speech, Francis thanked sponsors APC and FODC, John Maguire and his team for hosting such an extremely enjoyable and successful event, paid tribute to his fellow competitors and expressed special thanks to George Beacom and Bawnacre staff for the welcome and hospitality provided during the tournament.