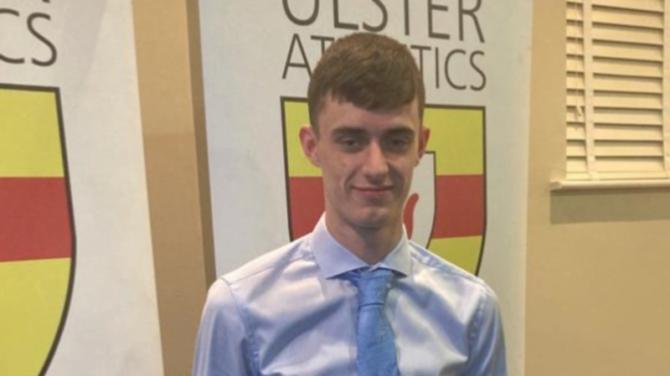 ALL of Lewis Loughlin’s hard work and dedication paid off at the weekend when he received not one but two prestigious prizes at the 15th Gala Ulster Athletics Star Awards Banquet held at the Bay View Hotel, Killybegs.

The Omagh High School pupil, a talented sprinter and footballer, attended the awards ceremony with his proud family looking on to receive the Male Athlete of the Year honour for the age group 16-19 for both 2020 and 2021.

It has been quite the year for Lewis. As well as being called up to the Northern Ireland u17 football squad, Lewis has excelled on the athletics stage.

For many years now, he has been training under the watchful eye of Trevor McGlynn, who runs Sprint Academy Ireland classes at Youth Sport.

The Omagh Harrier also claimed a silver medal in the Ulster and Northern Ireland senior men’s 4x100m event, running 47.12 - a new club record - as well as taking bronze in the 4x400m event.

In football, he represented Northern Ireland at u17 level at a friendly tournament in England.

Clearly, his sprinting ability helps Lewis on the football pitch where he plays as a centre-half for Ballinamallard United u18 and the reserve team.

Football and athletics combined with education make for an extremely busy lifestyle, but clearly Lewis is finding the right balance - as this year shows!