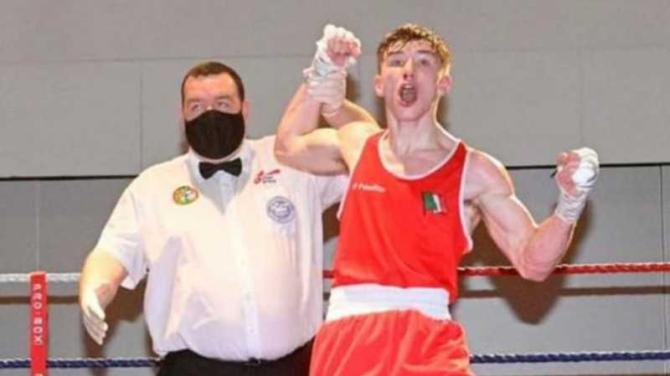 NEWTOWNSTEWART boxer Jude Gallagher made headlines across the country by lifting the Ulster Elite Featherweight title with a convincing victory over Monkstown’s Conor Kerr in Belfast.

After a close first round of high-quality boxing, Gallagher, of the locally-based Two Castles club, began to assert himself in the second as his work was just a little sharper.

The third stanza followed a similar pattern to the opening one, close again, but the local man gained the victory via an overall split decision.

This win may well ensure Gallagher qualifies for the Commonwealth Games in Birmingham next June.

In total, Two Castles had five boxers qualified for the National Boy 1 and 2 Championships, which were held over two weekends in Dublin.

All of their boxers performed well, with Daithi McNamee and Eoghan Miller losing their semi-finals to the eventual champions. Conan McSorley also lost in his semi-final via split decision.

Ronan McBrearty entered Saturday’s Boy 1 final and encountered a very mature opponent from Belfast. Ronan gave a good account of himself and can be proud of his achievement in winning the silver.

Club president Paul Mayse paid tribute, stating: “Jay Fee has something a wee bit different in his boxing style. He has a great movement and is very difficult to score against, whilst he can attack from different angles . He was very good over the course of this Championship and has more to come.”