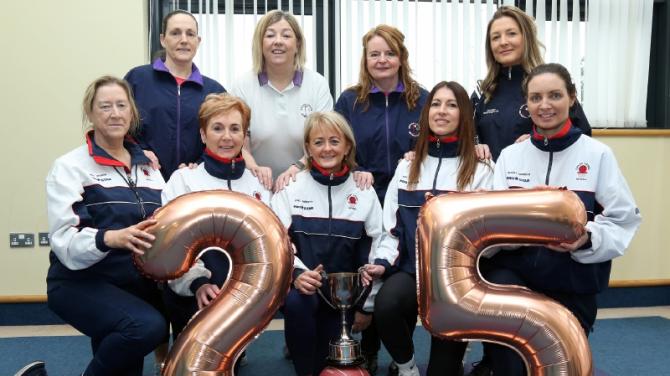 TWENTY-FIVE years since their first meeting, members of Omagh Netball Club reunited to mark the special anniversary on Saturday past, an event held at the CKS Community Centre in town.

Wednesday, February 19, 1997, is a date that stands out in the memory of those connected to the club. It was then Conor McCrory organised a meeting at Omagh Leisure Centre to establish if a netball team could be established in the locality.

It was obvious there was sufficient interest and a few days later a total of 44 ladies turned up for training.

Anne Grugan shared the duties of player-coach and Siobhan Mullin was captain.

It took some time for the players to settle as a team but when it all began to click Omagh quickly moved up through the leagues, climbing from the ‘F’ division, rising as high as ‘C’.

Killyclogher Parish Hall was their home - even if they had no access to shooting hoops and had to use a bin as an alternative!

Players often had to clean the hall after the previous nights’ bingo.

“We didn’t care,” said a spokesperson.

They were a proud cross-community club.

And they were clearly talented, the highlight being a cup-league double in the early noughties.

If last Saturday is anything to go by, there is still an appetite for a local netball team.

Some members of the original team are keen to reform Omagh Netball Club and anyone interested is asked to contact jenscott1@hotmail.co.uk

Meanwhile, on Saturday, March 12, the club will hold a reunion event at the Station Centre for anyone who was connected to the club in the past.

It will be held from 12 noon to 3pm and it costs £10 per person - participants can register on the day.

A male select team will take on the ladies in what is a much anticipated afternoon.