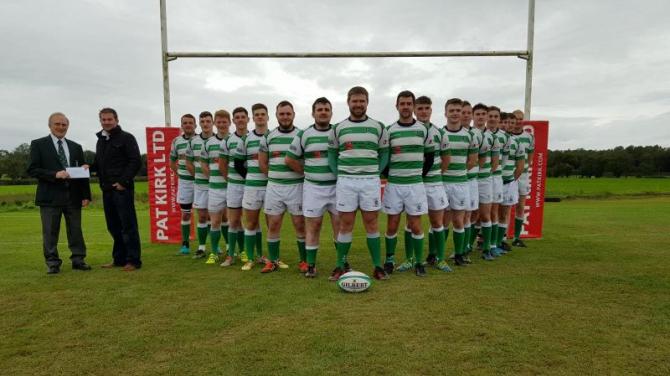 THE Omagh Accies Rugby Club seconds welcomed Ballymoney firsts to The Thomas Mellon Playing Fields in the Millar McCall Wylie Junior Cup first round on Saturday with the visitors squeezing through by 21-19.

The game kicked off in overcast conditions with Omagh out of the blocks first going through several phases. The home team backline was looking sharp with the Beatties, Adam and Kyle combining well at half-back.

The visiting defence was impressive and managed to thwart several attacks. By the halfway point of the first period Ballymoney were starting to get a foothold in the game and managed to grab the first score of the day with the visiting winger going over for a converted score. Both sides had several scoring opportunities for the remainder of the half, but the finally pass was proving elusive as the visitors led by seven points at the break.

The second half was a higher scoring affair, with both sides looking sharper in attack. Ballymoney doubled their lead with a score five minutes into the second half.

This seemed to spark the young Accies side to life, after a period of pressure on the visitor’s line, McKeown set a maul which worked its way over the line with Mitchell getting the ball down for a converted score. Within a couple of minutes Omagh had their second try of the day. Ballantine superbly fielded his own kick in the middle of the pitch before offloading to Gibson, the centre come flanker carried the ball for some 30 meters before passing to the supporting Beattie who crossed the whitewash for an unconverted score.

The visitors however regrouped and got themselves a further score after a sustained period of pressure in the Omagh ‘22’ and crucially this score was again converted. With time slipping away Omagh threw everything at the visitors and did eventually get a well-deserved try.

Omagh had numerous phases of play close to the Ballymoney line, with Beattie chipping the ball over the onrushing defence for Lagan to gather and score between the posts for a converted score with the last play of the match. This was an encouraging showing from the seconds against a side who are tipped to be contenders for the Ulster Championship 2 title this season.

Omagh’s forwards competed well physically with the scrum impressive throughout, the young backline is lively with several players posing a scoring threat from every area on the pitch.

This Saturday the seconds travel to face Ards in Conference League 2. All players expected at training this week.