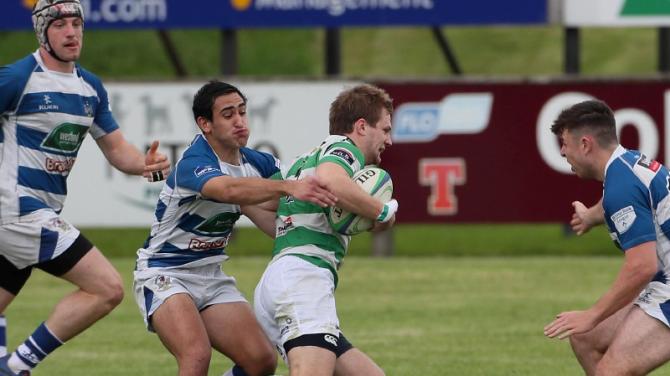 With the Stevenson Park outfit having had a little more in the way of match practice already this season, the extra cohesion and sharpness that brings was evident, particularly in the first half when they raced into a 24-7 lead.

Although they then extended that advantage to 38-14, the Accies produced a much more promising second half performance that allowed them to narrow the gap and move into this coming Friday night's Ulster Senior Cup quarter-final clash at Armagh with confidence.

At the weekend, Dungannon's Chilean import Luca Avelli, who kicked six conversions and a penalty was the stand-out performer, pulling the strings in the number 10 role, while Guilherm Lopez, Alex Gormley, Andrew McGregor, Mervyn Browne (2) and Jack Ravey all scored tries.

Although disappointed at the margin of defeat, Omagh coach Phil Marshall was surprisingly upbeat at the final whistle. He was particularly pleased by the performances of several newcomers, as well as the tries from Adam Longwell, Mervyn Edgar, Ryan Mitchell, Stewart McCain and three conversions from Scott Elliott, and although there were certain aspects of his team’s play that he knows will need improved upon ahead of their trip to Ballina on September 29, he was generally satisfied.

“It was what we badly needed, we needed a good run out and we got it,” he explained. “Every time we made a mistake, they scored. Everytime we made a mistake, we stopped, but the difference in the two teams was their 10, Luca Avelli. He ran the show, he was very good and they were a much, much better team to the one we beat twice last year.

“The game finished with us scoring a fourth try and getting a bonus point, so that’s a great positive to take from it, but we had four or five guys, who had never experienced rugby at this level before and unfortunately Ali Beckett had to go off after less than 10 minutes and go to A&E with a suspected fractured cheekbone.

“That meant 18-year-old Ben Scott, who I signed from Letterkenny, played almost the enitre game and did well, Scott Ballantine got the last 15 games at full-back, Eoin (Murnaghan) played most of the game at full-back and Kane Holden got his first taste of that level of rugby, so there’s big positives.

“There’s lots to work on too, but we knew that we have to raise the bar week in, week out and you could see they had a bit more energy, more zip in the legs, having played last week unlike us, but we pulled it around in the second half and it was an even contest, but this wasn’t about getting a W, it was about getting a P, a performance, which I got,” he concluded.