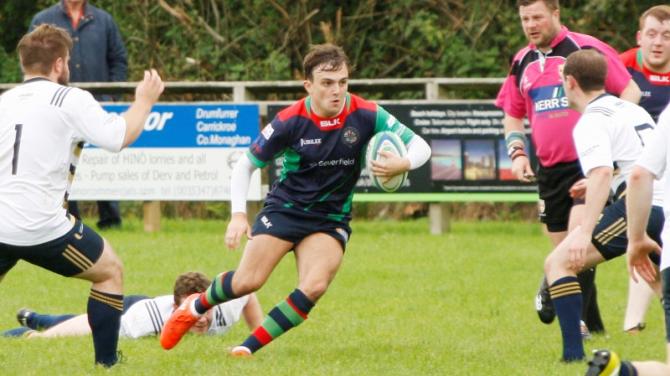 Out-half Eakin, who put in a great shift, made a scything early break to set up a promising situation. Skipper Treanor had several strong carries, as the Valley set about opening the scoring. The early pressure was repelled by the visitors, who then gained a good field position of their own.

A dropped ball on the Valley ‘22’ saw Haire react superbly. He hacked it forward and then deftly dribbled, before scooping it up to cross wide out for a great individual effort. The try went unconverted, but it was game on. A ‘show and go’ by Eakin added the second try on the 20 minute mark with Smyton adding the extras, as Clogher continued to press.

A storming run by Bennett was held up just short, but minutes later he was unstoppable in a similar effort to stretch the lead to 17 points. The conversion on this occasion rebounded off the upright.

Prior to the break a sweeping backline movement saw Crawford almost cross, but the students managed to survive. From the resulting scrum, the attempted clearance was charged down by Fegan, who followed up his good work by diving on the loose ball to add the fourth try.

Again the attempted conversion came back off the upright, but with a 22 point lead at the interval it was looking good for the Valley.

The second half didn’t turn out, as the coach had hoped. UUC opened up stronger aided by a succession of penalties conceded by the Valley. Bennett in the end took a yellow for the team.

Clogher were organised and efficient in defence preventing the visitors any real scoring opportunities. Crawford pounced on a dropped ball to take play deep into UUC territory.

Smyton charged down an attempted clearance and won the race for the touchdown to add the fifth try. Incredibly the conversion again rebounded off the upright for a unique hat-trick.

Play for a period was disjointed with handling errors and the inevitable penalties making any form of cohesion difficult. After early dominance in the scrum, Clogher began to struggle in this area with good possession in short supply. As the game drifted to its conclusion, Clogher were to get one more chance.

A penalty in midfield, Eakin again split the defence and found Haire on his inside shoulder. There then followed a display of magical feet that would have graced any contestant on ‘Strictly’.

He turned the defenders inside out, as he danced his way to the line and in a final flurry ended up under the posts for a great try. Smyton added the conversion to wrap up proceedings for the day. On Saturday its Conference League action with an away fixture in Omagh.