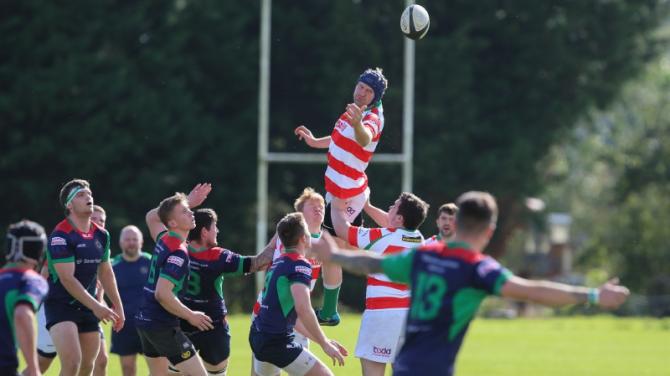 CLOGHER Valley Rugby Club took the spoils against Omagh Accies seconds in the Conference League and more importantly ‘John Rainey’s Cap’ with a convincing win in front of a sizeable crowd at Mellon Park Drive, Omagh, on Saturday.

Omagh started the match at a sprint, putting the Valley under severe pressure and coming away with the first try of the afternoon after just five minutes when they broke clear, with Kane running up the left wing.

With the score 5–0 to the home side, the Valley were shaken into action, but errors were allowing Omagh to compete at all levels. Valley worked their way up the pitch, with good interplay between forwards and backs. With a scrum five meters out, the dominating Valley pack should have capitalised, but Omagh held firm. Mitchell was holding the ball up well for the Accies and Lagan was making hits in the midfield. Omagh were then dealt a blow when they lost captain Porter to a rib injury in the opening 10 minutes.

With a second and then a third scrum at the five meters, Valley took the ball up the middle, then spread it wide, only to become isolated and the referee gave the penalty to the home side who kicked clear to touch.

It wasn’t until 20 minute mark the Valley cross the Omagh line for their first of seven tries. From a lineout, David Sharkey collected, Trotter spread it wide to Eakin who came back inside to the forwards to take it on.

After seven or eight phases of play the Valley’s Neil Trotter crossed the line, 5–5. The try went unconverted. The Valley doubled their tally three minutes later, a break from within their own 22, Ewan Haire burst out of defence, David Sharkey took the ball a few more meters, the ball was kicked up the pitch, a good chase gave possession back to the visitors, interplay between the pack and the backs spread Omagh’s defence thin. When the ball came back to the wing, Omagh had run out of defenders and winger Adam Bowles crossed for his first of two tries.

The Valley did not deal with the restart effectively, allowing Omagh the opportunity to get an attacking position. The hosts regained the lead on stroke of half-time, Beattie slipping through a gap in the defence and gained 30 metres before off-loading the ball to the supporting Kane for a converted try. Half-time saw Omagh leading 12–10.

The second-half was dominated by the Valley as Omagh lost flanker Mitchell to a yellow card and subsequently lost their momentum.