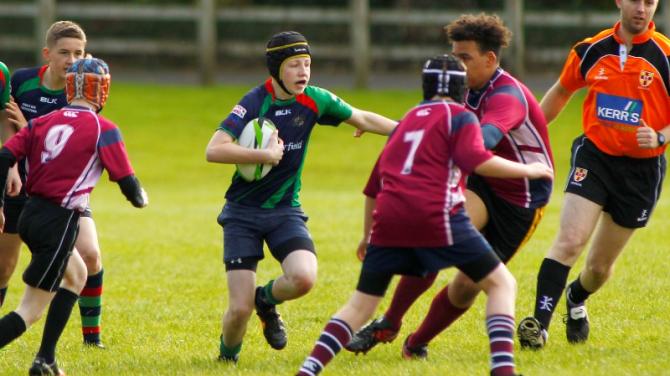 CLOGHER Valley get their U14 season off to a great start with a strong win over their Fermanagh neighbours, Enniskillen.

Their running with the ball was impressive, coming from their own 22-meter area at times to score.  They shocked the visitors with a three try lead in the first 10 minutes, punishing any Enniskillen mistakes.

This is a new team with nine players coming from last year’s U12 side.

They showed a high skill level, rewarding the hard coaching effort that is going into the Clogher Valley Youth teams.

Enniskillen rallied for a short period in the second-half with two converted tries, but it was the home side that took the bragging rights with a convincing 42–14 win.

Meanwhile, Clogher Valley U16 matched their U14 side with a strong 37–7 win over Enniskillen.

This is a side who have got the understanding of the game and are very well structured. Their running with the ball was impressive, coupled with fantastic support play, they took the Enniskillen side apart.

The speed of getting the ball away from the break down and the continuity of support pulled the visitors from one side of the pitch to another, creating gaps that were exploited with clinical ruthlessness.

This is a side to watch for the future, where at this level it is often individual players who make the difference, but this is a Valley side who plays as a team.

Their understanding of the games structure will take them a long way.