Accies recover from a sticky start to clinch home win 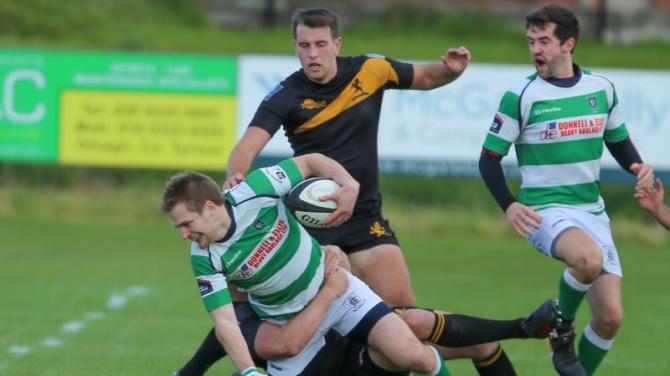 OMAGH Accies recovered from a desperately slow start to run out bonus point winners by 32-17 over Malahide at Thomas Mellon Playing Fields on Saturday.

The character of his side pleased coach Phil Marshall who was delighted that his side had righted a wrong against a visiting side who won twice in Omagh last season.

“We compounded our own misfortunes in the first 15 minutes,” Marshall explained.

“But the way that they reacted was very, very pleasing. For the last 30 minutes of the first half, we played some good rugby with a slight wind against us and up the hill.

“We game managed very well today, that’s what it was all about. We kicked when it needed to be kicked and wee Stuart Ballantine at 10 had a super game, he slotted all his kicks, he had a very solid game.

“It was a big step up from last week, out game management was so much better, we took the on up front and we won the battle, our backs defended really well too.

“It was a good reaction from them, they played smart rugby - when we kicked, we kicked intelligently, we turned them, put it well behind them.

“We got what we deserved today, we deserved to win with a bonus point. We were far, far superior to them, which was really pleasing considering last season they came up here and won twice!"

From the off, things started to unravel for the hosts.Young Adam Beattie, who started at scrum half, hurt his ankle early on, leading to Dean Kane entering the fray at 12 and captain Stewart McCain reverting to his usual scrumhalf position.

With fullback Scott Elliott earning his second yellow card in as many games, Malahide initially smelt blood and raced into a 10-0 lead through two unconverted Marcus McAllister tries.

That was about as bad as it got for the home side, though, and they were soon ahead and in control through two forwards tries from Ricky Hemphill and Stuart Allen, converted by the again impressive Stuart Ballantine, who also knocked over two penalties, as the Accies went into the break 10 points clear.

After the restart, Ryan Mitchell and Mervyn Edgar both touched down and Ballantine added another conversion before Kyle Alexander was yellow carded, allowing Malahide in for a consolation score at the death as the Accies enjoyed a comfortable win by 15 points in the end.