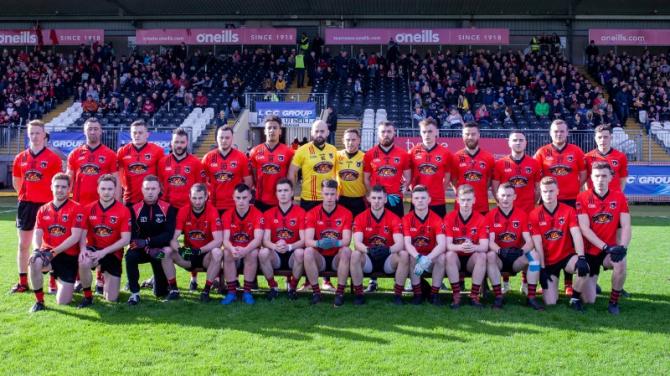 THE journey into dreamland continues this weekend for Tattyreagh when they enter the provincial arena in an Ulster Club Intermediate Football Championship clash with Armagh champions St Peter’s.

The Tatts believe anything is possible following their remarkable run of success that has seen them climb from Junior to Senior football in the space of a year with successive championship triumphs.

A team performing with style and confidence will travel to the Athletic Grounds in Armagh on Saturday evening with a firm conviction that they can make an unforgettable season even more memorable.

Team captain Niall Keyes paid tribute to the management team of Stephen McHugh and Stephen Ferguson, who have guided the club to unprecedented levels of success.

“When the two Stevies came in, it changed the whole thought process behind the club,” he said.

“And we knew that we were good enough for senior football.”

Keyes said he had no doubt Tattyreagh would get the better of Augher in the Tyrone Intermediate Championship final.

“We went out, we weren’t cocky, but we were confident in our own ability, and it became a fairy-tale.”

Goalkeeper Keyes has missed most of the campaign due to injury, but he has had an able deputy in Ryan Pritchard, who has been a star performer right through the championship run.

“It’s an absolute privilege to be able to put on the jersey, and personally the injury was heart-breaking, but I don’t care. As long as this club wins the Intermediate Championship and goes up to senior football.

“I did everything in my power to help Prichie. If it wasn’t for Prichie, we wouldn’t have won, because he got us through Dungannon, and he got us through Gortin. It’s an absolute credit to him, he was thrown in at the deep end.”

Keyes did get his chance to play in the final, coming on as a sub for the last couple of minutes, before being presented with the trophy by county chairman Michael Kerr.

“It was fantastic, I genuinely wasn’t expecting it. I nearly pulled a hamstring hitting that last free, because I wasn’t warmed up.

“But it was great to get on there, and when the final whistle blew, I didn’t know what to do, it was just frantic.

“It was sheer relief. These boys have put in some serious, serious effort. The boys did me proud, they did the whole community proud.”

The Tattyreagh skipper said the players will continue to honour the memory of two club stalwarts, Pat Darcy and Dominic Earley, who died last year.

“It’s about how you channel that, and how you respect their memory. Without Dom, we wouldn’t have been the unit that we are today, because he came in with the two Stevies, and the work that he put in was absolutely phenomenal behind the scenes – video analysis, individual player prep, it was absolutely outstanding.”

Meanwhile, Tyrone senior champions Coalisland will also be in provincial action at the Athletic Grounds on Saturday evening, when they take on Crossmaglen.

“We’ll go out, we’ll have no fear, we’re there on merit with our championship title and we’ll give it a rattle,” said Coalisland midfielder Plunkett Kane.

“We knew we had something special in our team. At the start of the year it didn’t happen for us, but in every game in the championship we were behind and we came through and won it.”

And he’s hoping that the players will make their mark in the provincial arena now they have returned to the top in Tyrone for the first time in eight years.

“In 2010 we had a great year, played well that year, and we thought our team was young enough at that stage and we were hoping that we were going to get another one or two championships.

“We got back to the final in 2016 and it didn’t happen for us. It has been a long road this year, especially with the start to the year that we had, but to get back and win number ten is unbelievable.”