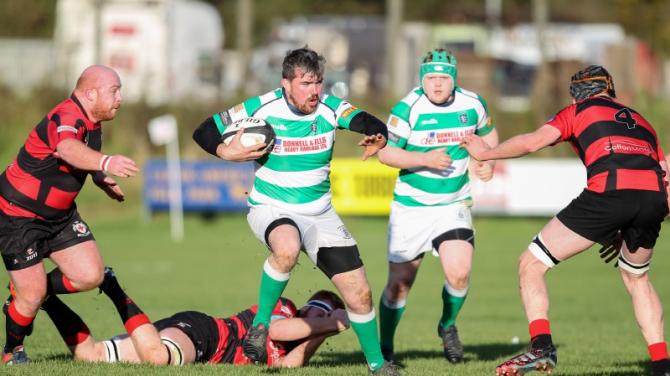 A LARGE attendance was in place to see Omagh Accies Rugby Club firsts achieve their highest score of the season, as they brushed Tullamore aside in Ulster Bank League 2C at the Thomas Mellon Playing Fields on Saturday.

Tullamore came into the game full of confidence after defeating Bangor for their first win of the season a week earlier, but any hope they had of a positive result was extinguished by a rampant start to the second half from the home side, who ran in four tries in 14 minutes after the restart to stamp their authority on proceedings.

Early Accies pressure initially yielded only a Scott Elliott penalty for a 3-0 lead after 10 minutes, but Phil Marshall's men soon found their feet with Adam Longwell pouncing on a loose ball following a ruck close to the Tullamore line. The flanker picked up possession and drove over for an unconverted try in the corner on 18 minutes.

Seven minutes later and it was 13-0 when an intercept and carry from Elliott provided the platform for the ball to be recycled and Scott Barr kept the forward momentum going after play had switched from the left to the right flank and Neil Brown eventually went over in the corner.

Just before half-time, Tullamore managed to get an unconverted try when Sean Rigney capitalised on some forwards pressure.

That score gave the visitors a sense of hope going into the second half, but they were left dumbstruck by the Accies after the restart.

From the first move, a good catch and clever pass outside from Mervyn Edgar sent Elliott in for a try on 42 minutes and on 44 minutes Elliott's chip through was gathered by Brown who teed up Hanson for another score. On 50 minutes, Kaine Holden and Stephen Maclaine combined with the latter's grubber kick allowing Brown in again, while on 54 minutes Hanson scythed through the Tullamore defence from around halfway to complete a four try burst, all converted by Elliott, in the first 14 minutes of the second half.

But they weren't done yet, there was more to come.

A seventh Accies try arrived on 68 minutes, just after Eamon Bracken had bulldozed over for a second Tullamore touchdown converted by Karl Dunne. Patience in the build-up was rewarded when Scott Barr darted over for another score converted by Elliott and that was followed by a rampaging run from Ryan Mitchell who scampered through to add the eight Omagh try of the day, with Elliott adding the extras.

Fullback Maclaine the received a harsh yellow card with only a few minutes remaining and Tullamore managed to score a third try when Cathal  Feighery crossed the whitewash to complete the scoring.