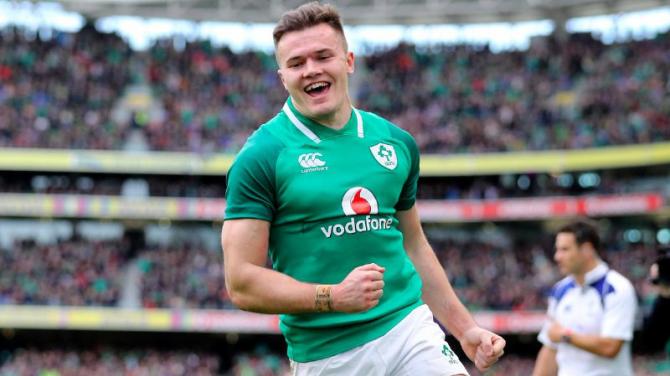 Stockdale, son of the Reverend Graham Stockdale - a former Presbyterian minister at Newtownstewart and Gortin - bagged the only try of the game on an historic night in Dublin. Remarkably, it was Stockdale's 12th try in just 14 caps.

A short while into the second-half, a quick sequence of passes, including a nice reverse, found Stockdale out wide. A perfectly executed chip from the Ulster standout was chased right to the line and he touched down to send the home crowd wild.

Watching on from the stands at the Aviva Stadium, Jacob's father and grandfather were beaming with pride as the winger scored his 12th Ireland try in 14 internationals.

His proud father described the "outbreak of emotion" which accompanied it.

"I thought we would never top the Grand Slam match against England, because that was a very special moment, but Saturday went a notch higher," Rev Stockdale told the BBC.

"I took my dad down to the match and the two of us were sitting in the VIP seats with all the players' families around us, so there was just incredible high fives, hugging, cheering - just such an outbreak of emotion.

"We never anticipated that Jacob would be able to do what he does in such a short period of time. I suppose the key thing is being part of a pretty special team - I think the best Ireland has ever had."

Speaking after the final whistle, Jacob said the win was a "mixture of elation and relief." He added: "It's the kind of game where you get back to the changing room and just take a big breath.

"Thank goodness we did it. We have all worked really hard to get to this point, and it's a massive team victory, particularly defensively. I thought our defence was massive today. These are the kind of games that really make a difference."

Asked if the win boosts Ireland's World Cup hopes next year, Jacob said:  "The World Cup is a long way away at the moment. We still have the Six Nations to play and we have a couple of warm-up games before then.

"To beat New Zealand is a massive achievement for us and we won't be looking too far ahead. There is still a full season of rugby to be played."

It has been a meteoric two-year rise for the 22-year-old Ulster winger. The flyer was watching at home on TV when Ireland registered their first-ever win over New Zealand, the 40-29 victory in Chicago in 2016 that proved 111 years in the making. Fast forward just two years and Stockdale is making the international headlines.

The Tyrone native said: "It has been a massive year-and-a-half for me and I don't plan on stopping any time soon."

Confirming he watched Ireland's breakthrough victory over the All Blacks at Chicago's Soldier Field at home, Stockdale added: "I was still in the Ulster academy at that point, and had barely played for them.

"I had played a couple of games for Ulster so it was more me as a fan watching Ireland beat the All Blacks. It was incredible to actually be a part of it this time; and it is really special."

Asked to contextualise his Test match progress, Jacob said: "Part of me can't believe it. It has been an incredible road to where I am at.