Bonus point victory for Clogher Valley sends them to summit 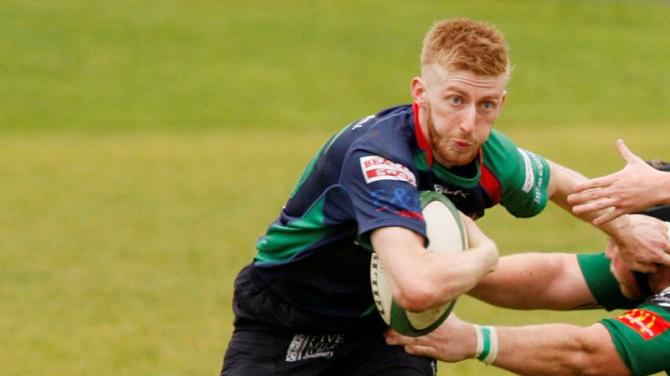 Due to unavailability and injuries, Valley made three changes from the side that lost to Randalstown. Trotter/Cullen started at centre/wing with Fegan at blindside wing forward.

Valley started brightly on a mild autumnal day. The pre-match warm up had seen a host of dropped balls but when the game started in earnest it was a different story. Valley pack dominated against a larger UUC pack from the first minute.

The ball carrying abilities of the front five saw UUC under sustained pressure. Valley intent was clear when awarded a penalty on 10 minutes deep in UUC 22.

They opted for the scrum, Wilson picked up went blind and released Cullen who twisted over the line for a well worked try in the corner, 5-0 to Valley.

Valley continued to press but whilst the forwards were winning the collisions there was an absence of an ability to break the stout UUC defence.

UUC barely got out of their own half. The pressure was so great that any ball they did get was kicked away to a Valley back three who were happy to run the ball back to maintain the momentum.

Valley eventually broke through after 33 minutes. A lineout take on halfway saw a rolling maul advance into UUC 22.

With the referee signalling a penalty to Valley for an infringement, out-half Smyton took the ‘Irish’ free ball option and kicked to the corner where winger Coulter caught and scored. From the touchline Smyton’s conversion hit the post and then the cross bar before dropping over for a 12-0 lead.

UUC hit back and had a period of pressure. Just on the stroke of half-time they kicked a penalty for the half time score of 12-3.

Valley started the second-half in the same fashion as the first. An excellent rolling maul was held up over the line as the referee was playing advantage. Going back for the penalty, Valley kicked to touch but the lineout failed to control the ball and UUC had a scrum in their 22.

The Valley drive forced the UUC scrum half to knock on, so the scrum was reset to Valley. As we have seen so often Wilson picked up and drove over for an unconverted try and a 17-3 lead after 47 minutes.

From the restart, Valley went to sleep and some poor tackling allowed the UUC right winger to run over from the Valley 10-metre line to make it 17-8.

Valley settled back into their rhythm and after 58 minutes had another five-metre scum. Wilson again picked up and drove over. Haire added the conversion and Valley had their bonus point and a 24-8 lead.

On 67 minutes the dominant Valley scrum - much improved from the Randalstown game - shoved UUC off their own ball on half way. As the ball bounced loose Wilson picked up and swatting defenders aside went over for his hat-trick. Haire converted and Valley’s lead had stretched to 31-8.

Valley had already replaced prop Hopper with Mark McKenna and now Wilson was replaced by Dunwoody.

In the final minutes Valley started to throw the ball around but UUC continued to defend well and there were no further scores.

A workmanlike performance by Valley. What will please the coaches most is the fact that Valley conceded only eight penalties throughout the game.

The victory sees Valley return to the top of the table. Next week’s top four game at Academy will again be a test of the progression being made.