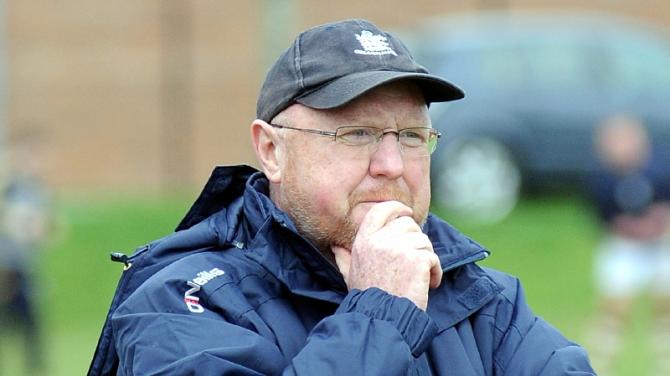 OMAGH Accies head coach Phil Marshall was left fuming by the performance of the match referee as his side fell to a narrow six-point loss in Bruff in the Ulster Bank League 2C contest on Saturday.

The referee dished out four yellow cards and one red to the visiting Tyrone side, with Adam Longwell (2), Ricky Hemphill and Jonny Sproule all receiving a trip to the sin-bin.

Longwell saw red for his double infringement, which means he will miss at least the Accies next game at home against Seapoint, if not a second too.

“It was the same boy who done us in Ballina! I suppose you could put it down to our ‘ill discipline’ costing us the game, according to him! That’s what he’ll tell you,” fumed Marshall.

“I’m just gutted here because we got off to such a good start."

Omagh began on the front foot with Neil Brown scoring in the corner, converted by the returning Stuart Ballantine, who had recovered from the concussion that kept him out from the Tullamore game. The consistent number 10 then knocked over a penalty to make it 10-0 and all was rosy in the Accies garden.

Unfortunately the thorn in their side then raised its ugly head with the first yellow card to Longwell and the penalty try being awarded to a Bruff side, who went on to run in a try through Cillian Rea, which was converted by Kevin McManus, who knocked over a penalty for a 17-10 lead at the break.

After the restart, Omagh ‘got tore into them’ and after Bruff were reduced to 14 men through a yellow card, Phil Ewing dotted down in the corner, superbly converted by Ballantine, to draw the sides level at 17 apiece.

Just after that the Accies wheels all but fell off once the mechanic of their misfortune again took centre-stage by issuing a flurry of yellow cards and a red to Longwell as McManus kicked two penalties to see the home side home.

On the plus side, if there is one for the Accies, having played for so much of the match with a numerical disadvantage, they did well to keep their line intact at the end and return with a losing bonus point.

“We had to play the last 25 minutes with 14 men,” observed an exasperated Marshall, who added: “I don’t mind getting beaten by a good team, but to get beaten by an incompetent official is hard to take!

“It was a frustrating and long weekend and I will be demanding that there will be a response, simple as!,” he concluded.