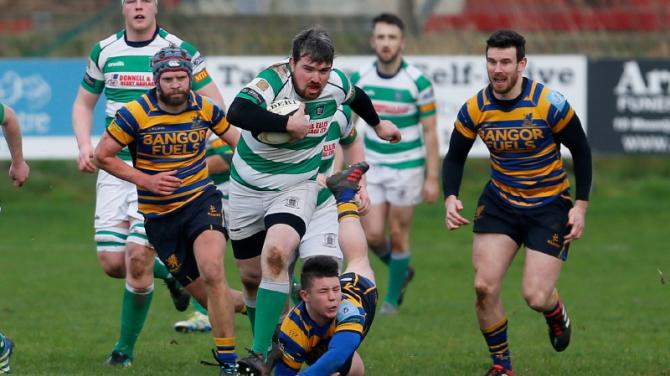 OMAGH Accies earned a hard-fought win over their Ulster rivals Bangor on Saturday to move into a share of third place in the 2c table with Bruff.

Phil Marshall praised his side’s defence and feels they deserved the win after such a gritty performance.

Well-worked tries from Ali Beckett and Matty Eccles, one converted by Stuart Ballantine, saw Marshall’s men lead by 12 points after only seven minutes and although the Seasiders struck back with an unconverted touchdown and a penalty of their own, it was Omagh who strolled into the break with an 11 point lead when Neil Brown waltzed home for a try, converted by Ballantine.

At that stage, it looked a case of when, not if, the Accies would seal the bonus point fourth try. However, that wasn’t to be as Bangor’s physical approach took its toll and apart from two Ballantine penalties, the home side failed to score again.

“I couldn’t see them not scoring in the second half, but there you go, such is life!”, exclaimed Marshall.

“Our backline in the first half was ripping them to shreds with good individual skills leading to our three tries.

“We had a super start. I asked them to get me a good start and they certainly did with two tries to put us 12-0 up in the first 10 minutes and that just set the tone because they had nothing to hang onto and they had to chase it, which played into our hands a bit.

“It was a massive challenge because they [Bangor] were trying to kick-start their season and brought their best possible team and put it on the pitch.

“They were at least a stone a man heavier than us up front, which they proved at times, pushing us back in the scrum, but not to the extent that it hurt us. We got the ball away every time and I think they only got one scrum penalty the whole game and we got one, but our defence was very, very good.

“The boys gave me everything they have, but it’s hard to withstand that amount of massive men running at you continually."

Although the match ended with a tinge of disappointment due to the lack of that fourth try, Marshall admitted that before kick-off, he’d have happily taken a win of any kind and with the top two, Midleton and Ballina relentless in their winning runs, it was vital his side kept pace.

“It’s one I’m very glad to get over, but we’ve played Bangor three times this year and we’ve beaten them three times, so maybe they might respect us now!,” he said with a wry smile.

“We needed that game, we were very rusty, particularly in the first half when we made a lot of unforced errors. We probably made as many unforced errors as we would in a whole game but it was very pleasing results wise because I said before the break we needed to stay in the mix and that has definitely kept us in the mix.

“But onwards and upwards, we’ve only eight games to go and all we can do is keep winning and applying the pressure on the teams above us.”