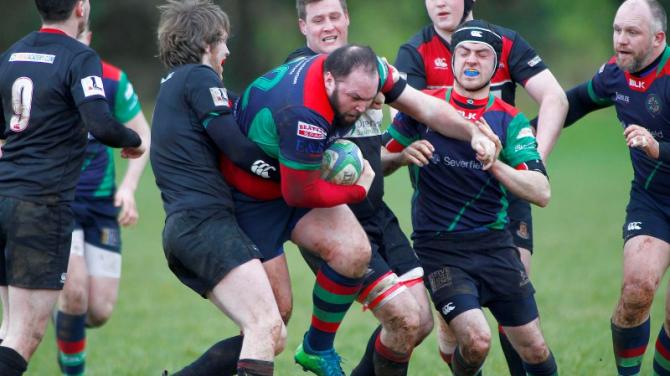 Clogher Valley Rugby Club firsts progressed through to the quarter-final of the Towns Cup with a convincing win over the league leaders, Limavady, at the Cran.

The Valley got their revenge on the league leaders in the second round of the River Rock Towns Cup with a 32-10 win setting up a home tie against Portadown in two weeks’ time.

The Valley got off to a perfect start after six minutes when Ryan Wilson, David Sharkey and Rodney Bennett combined to punch a hole in the visitors’ defence. Several recycles of the ball later, Bennett drove over from short range to open the scoring. Paul Armstrong converted.

Ten minutes later a second try was added. From a five-metre lineout, David Sharkey secured the ball. The Valley pack drove hard over the line and David Sharkey emerged from the pile of bodies with the ball in his hands. Twelve points ahead, the Valley relaxed a little too much.

Limavady piled on the pressure and kept the Valley pinned in their ‘22’ for four minutes. A superb tackle by Aaron Dunwoody allowed Ryan Wilson to strip the ball from the Limavady lock and the Valley eventually cleared their lines.

A Limavady scrum at the home side’s ‘22’ metre line was spread wide by the visitors. Their backs were given too much space and crossed the line for their opening try. With five minutes to the interval, Paul Armstrong gave a clever inside pass to Fleming Agnew who cut through the defence making 25 metres.

The ball was recycled and Armstrong was on hand to pop the ball to the hard-running Bennett who crossed the line for his second try and Valley’s third.

Armstrong added the extra points and the Valley led by 19-5. As the half was coming to an end, the Valley got a lesson on never allowing Limavady space. From a lost Valley lineout, Limavady spread the ball wide to score 15 metres from the touch line. The interval gave the home side a 19-10 lead.

The second half was not played at quite the same electric pace of the first. A penalty from Armstrong gave a home side a 12 point lead after just 12 minutes after the interval and then a penalty try added a further seven points. An attacking scum five metres from the Limavady line was secured by the Valley.

Wilson – at number eight – screamed for a drive and the pack responded as they marched the scrum towards the visitors’ line at speed. The Limavady flankers broke early to attempt to disrupt the scoring of the try and as Wilson was touching down, the referee had already turned and was running towards the middle of the posts to award the penalty try.

Armstrong added the two points and then with five minutes to go he added a further three from a penalty. Armstrong’s tally of 10 points from the boot, Bennett’s brace of tries, Sharkey’s try and the penalty try gave the home side a comfortable win of 32–10 over the visitors.

Whilst coach Stephen Bothwell was happy with the win, he still believes there is more from this Valley team. The inter-play between forwards and backs in open play is improving with each game.

The Valley are offering the supporters more than just a strong driving pack with a more rounded style of play. David Sharkey was awarded ‘Player of the Match’, but in reality it could have gone to one of five or six players.

Dunwoody was superb around the pitch, Bennett scoring two tries and numerous line breaks, Armstrong pulling the strings and linking the forwards and backs superbly, Henderson carried well and was strong in the scum and Wilson, as always made ground every time he put his paws anywhere near the ball.

This week’s match is home tie in the league against Lisburn.