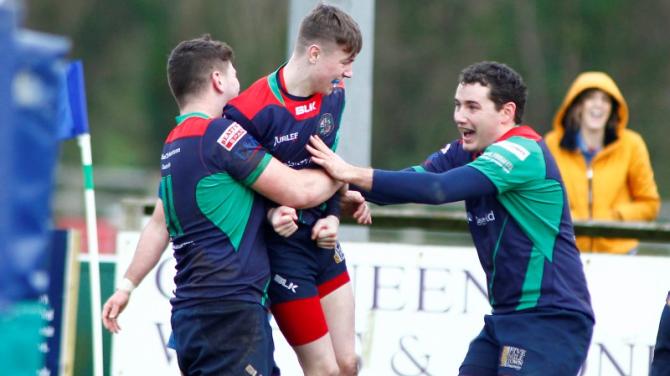 CLOGHER Valley Rugby Club firsts produced a commanding performance to overcome Portadown on Saturday as they marched into the semi-finals of the Towns’ Cup.

The Valley got off to a dream start with a converted try within the first three minutes to take the lead against their League One visitors at the Cran. A penalty on the half way line was kicked deep into the corner.

The lineout was secured by David Sharkey and set up a maul. The Valley pack marched over the line and Stephen McWilliams dived over to open the scoring.  Paul Armstrong added the conversion.

Moments later, the Valley secured the restart, quick hands got the ball to Josh Coulter who kicked the ball down field.  The chase caught the Portadown full back, and the ball was spilled.  Paul Armstrong kicked long and Fleming Agnew on the left wing was first to the ball, after the ball was recycled, hooker Kyle Cobain was on hand to drive over the last eight meters to double the try score. Paul Armstrong again added the conversion.

Stunned into action, Portadown threw all but the kitchen sink at the Valley, but the defence held strong.  After 20 + phases for Portadown, Aaron Dunwoody made a try saving tackle and then got over the top of the ball carrier to win the penalty.  The Valley cleared their lines.

At the 25-minute point, the Portadown pressure eventually told. An overthrow in the lineout by Portadown was caught by their open side flanker, two missed tackles later and he placed the ball against the Valley posts to open their scoring. The conversion took them to within seven points.

With renewed vigour, Portadown upped their game.  A lineout to the visitors 10 meters out from the Valley line was secured by Portadown, who drove towards the Valley try line. The initial surge was held back, but a splinter group broke off and drove over the line, despite claims from the home side that the ball was held up, the referee disagreed and gave the try.  The conversion levelled the score to 14–14.

The second-half started with a flurry. Both sides coming close, but unable to cross the opposition line. Twelve minutes after the restart, a Portadown lineout was disrupted by the Valley, Paul Armstrong set his backs off down the pitch. Bennett passed to Coulter who then popped to Ewan Haire who came through like a bullet and scored under the posts.  Armstrong added the two points.

Four minutes later, a Valley lineout in their own half was recycled, Armstrong spun the ball wide to Sharkey, who drew his marker and popped to Bennett, who then made 20 meters and drew the full back, a perfectly weighted pass gave Ewan Haire the space to score his second try.

At 26 – 14 up, the Valley started to take control. However, Portadown was not following the home sides script.  A scrum five meters out from the Valley line was secured, the ball was spun wide and they sored in the far wing.  At 26–19 and 12 minutes left, there was tension in the air.

The Valley secured the win with another try in the corner.  A scrum five meters out, was spun to Paul Armstrong who gave it to Rodney Bennett.  A stampeding Bennett closing in is a terrifying sight for any defender, a half hearted attempt was made to stop him, but he drove over to score Valley’s fifth try.

Armstrong added the two points from the touchline to finish the game 33–19 to the Valley.

Ewan Haire picked up Player of the Match award but in fairness it could have gone to one of five players. Armstrong for his control of the game and the monster kicks up the pitch; Rodney Bennett for his crunching tackles and yards made with the ball in hand, Ryan Wilson for his defensive work and ball carrying or to David Sharkey for his lineouts, ball carrying and leadership.

The Valley march into the semi final which could be against Enniskillen, Armagh 2 or Ballyclare. This Saturday it is back to the league with an away trip to Larne.