DAY OF DOUBLE DELIGHT FOR ACADEMY 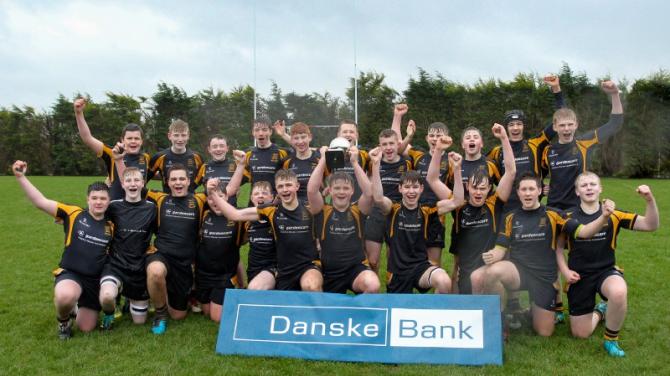 SATURDAY was a day of double delight for Omagh Academy, as both its rugby and hockey teams secured success at the Royal School, Dungannon, on a memorable day for pupils and staff.

The girls' hockey team had just finished celebrating securing their place in the final of the Senior Shield after a dramatic penalty run-in triumph over Victoria College, Belfast, when the boys' rugby side clinched a tense 17-11 victory against a spirited Down High School side to win the Medallion Bowl trophy for the first time since 2007.

On a day of horrible conditions, principal Ruth Maxwell said: “We are very proud of both teams and the full squads, as well as the coaches. They have put in a lot of hard work from August right through the school year, and they are very committed to their training regime, to their matches and each other.

“We are just delighted that all of their hard work has paid off.

“The whole school is very proud of them; it was a memorable day for the pupils, their parents, coaches, the school community, and for Omagh.

“Every player stepped up to mark. The conditions were appalling with the rain and the wind. It wasn’t easy, but the players never gave up.

“At their age, and under the pressure, how they held their nerve was a real credit to them, it says a lot about their character.”

Both sides were well supported by a large travelling fan base who were in good tune and provided an excellent atmosphere around the pitch.

James Maxwell was the standout player in the rugby, but this was a tremendous team effort from the Omagh boys. In an energetic performance full of drive, determination and desire, Academy raced into a 10-3 lead at the half-time break.

In a thoroughly impressive display, Stuart Bradshaw's side held their nerve even when Down reduced the deficit to 10-8, keeping their composure to make it 17-8 and eventually holding out for a six-point victory.

Beaming with pride at the final whistle, coach Mr Bradshaw said: "It was an excellent performance from the team, every single player left their mark on the game whether it be in attack or defence."

If the boys' victory was tense, the girls' was almost unbearable. Following a stalemate in normal time, the game went to penalty run-ins where agile keeper Nadine Hunter was the heroine.

Academy missed their first two penalties, but Nadine  was equally as impressive as her counterpart, keeping out Victoria's attempts.

Neave Nethery and Katie Ballantine both scored to set Omagh up for an unforgetable victory and Nadine completed the task by lunging to her right to save Victoria's final penalty as Academy celebrated their victory.

An elated squad rushed to smother her in goals as they realised they had made it to their first major final since 2010.

Full reports and more photographs in this week's Tyrone Constitution...