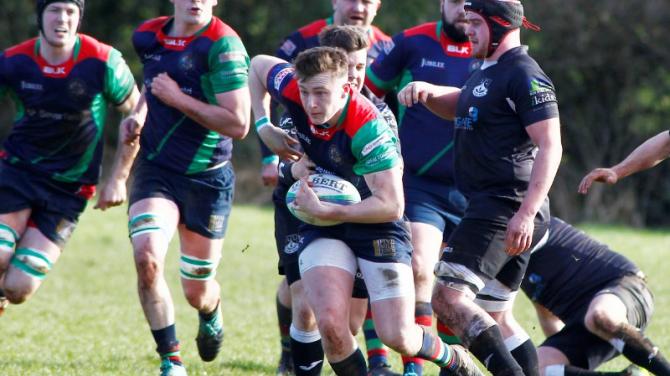 WITH just two games remaining in Kukri Championship Division Two, Clogher Valley Rugby Club have surprised everyone to rise to the top of the league.

Few would have predicted league glory for Stephen Bothwell’s side in their pre-season thoughts, but following a 24-3 bonus-point victory over Ards at the weekend at the Cran, the title - and promotion that goes with it - is now a very real possibility, although they still have a lot to do.

In a thrilling conclusion to the season, Bothwell’s side must play two of the top four - and the coach believes only two bonus-point victories will guarantee league success.

No matter the outcome, the Valley coach is simply happy to have been involved in the race for promotion.

“Winning the league or gaining promotion wasn’t something we set out to do at the start of the season,” admitted Bothwell.

“All we wanted to do was play good rugby and if we found ourselves in a good position, then yes, of course we would have taken success with both hands. But it’s not the be all and end all. We are in bonus territory. If we can keep playing our good rugby, and the mood is good in the camp, then I can’t ask for anything more.”

Despite their eye-catching position, it will take something special for the Valley to clinch a remarkable league triumph - something that Bothwell acknowledges.

“We are delighted with the position but we are under no illusions, we have two tight games left in Randalstown (Tuesday, March 26) and Limavady (Saturday, March 30). Every team at the top, from first to fourth, can still win the league.

“There’s just one point between us and second-placed Academy, we’re four ahead of Limavady in third but they have a game in hand. Randalstown are fourth, 10 points behind us, but they have two games in hand.

The convincing win over Ards was the perfect confidence boost ahead of their Towns’ Cup home semi-final with fierce rivals Enniskillen this Saturday.

To say that the ‘double’ is still possible for the Valley deep into the business end of the season has taken everyone, even Bothwell, by surprise - but he’s enjoying every moment of a memorable campaign.

“I think we had one eye on the match with Enniskillen against Ards on Saturday, as much as I kept telling the players to focus.With such a big game ahead, though, it was difficult.

“It’s a local derby, a big game. It’s going to be a step up for us and it will be interesting to see where we are. Enniskillen are going well - they have won five or six games on the bounce.

“They go in as favourites. The pressure is on Enniskillen to turn us over. It will be a good contrast of styles.”

Last Saturday, Valley went top of the league with their bonus-point victory over Ards.

Sitting sixth in the league, Ards were always going to be a tough team to beat.

From the outset, the Valley dominated the match, but unforced errors kept the visitors in the game.

The Valley scored their opening try from a Rodney Bennett break, the ball was recycled twice then Ewan Haire cut through to score.  Ards replied with a penalty.

The next 15 minutes was again dominated by the Valley, but the error count rose. The half-time greeted the teams with a score of 5–3 to the home side.

After stern words from the coach at the interval, Valley sparked into action. Fifteen minutes into the second half, the Man of the Match, Paul Armstrong, spotted the Ards players out of position, kicked long and wide, Fleming Agnew was the quickest to react and gathered and scored in the corner to make it 10–3.

A few minutes later, an Armstrong try was converted by himself and gave the Valley the breathing space they needed. 17-3 ahead, the Valley settled and started to play the rugby their coach asked for.

The big ball carriers done damage in the tight, then they spread it wide to the backs. The bonus point came from the fourth try five minutes before the end.

Valley pulled the Ards defence left then right, this created the space for Armstrong to cut through the middle and score under the posts.  He again converted his own try.

The match ended 24–3 to the home side. It was one of those matches that spectators would say was made hard by the mistakes from the home side, but a win is a win and when it comes with a bonus point it is all taken gratefully.

Armstrong picked up the Player of the Match award, with his two tries and two conversions, but credit goes especially to Rodney Bennett, Aaron Dunwoody, David Sharkey, and Michael Treanor for their work around the park.