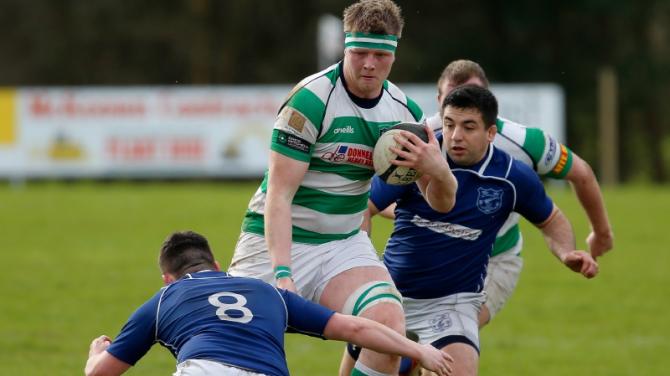 OMAGH Accies coped well with an extremely physical Thomond side to achieve a bonus-point victory at Thomas Mellon Playing Fields on Saturday, but results elsewhere went against them.

Phil Marshall’s side produced a decent performance to get their victory - courtesy of scores from Ali Beckett, skipper Stewart McCain, Ryan Mitchell and Adam Longwell - but all three teams above them recorded wins.

Second placed Midleton defeated Bangor with a last second drop goal, Bruff catered to a 31-5 victory over Tullamore, but perhaps more importantly, fourth placed Malahide, who the Accies visit on April 6 in the penultimate game of the season, thumped runaway leaders Ballina 38-17.

Those results leave the Accies where they started the day, on the outside looking in at the promotion play-off party, knowing that if they are to have an chance of extending their season past April 13, they have to win at Malahide and at home against Ballina – no mean feat on either score.

“We are delighted to get the win,” said Marshall.

“The target was the bonus point and we've achieved that. The performance was ragged at times.

“The line-out and defence needs a wee bit more work.

“They were a very big physical side but we coped with that admirably. Overall, I can't fault the effort of the players, we had a little bit more quality.

“I was disappointed, however, with results elsewhere. I didn't see Bruff and in particular Malahide recording bonus point wins.

“We didn't close any gaps but I had warned the players that all we can do is get our five points and that is exactly how it panned out.”

As Marshall said, the Accies will have to sharpen up their lineouts and play a good bit better than during the opening 25 minutes against a Thomond side, who belied their bottom of the table position with a rousing opening to proceedings.

The visitors wasted little time in getting going, as Jordan O’Donnell capitalised on a searing break from scrumhalf Aaron Leonard Rice before Dean O’Brien grabbed their second touchdown from a catch and drive following a lineout to give them a 10-0 lead after less than a quarter of an hour.

Those early setbacks served as the wake-up call the Accies badly needed and Scott Elliott spurred his side into action with Matt Clyde providing the platform for Beckett to wriggle over for the hosts opening try, converted by Elliott.

Having managed to string several phases together, Phil Marshall’s men continued to build on their opening score and attempted to play the game in the Thomond 22 from  where they struck again before the interval when, after the visitors had missed a kickable penalty, skipper McCain got a try following good work from Mitchell and early replacement Peter Scott. Elliott again added the extras.

Thomond responded well after falling behind for the first time, but Matty Eccles, who recovered from the injury sustained at Midleton last time out, put in three superb tackles to keep their line intact.

After the restart, Elliott was denied due to a last gasp tackle before Mitchell dotted down after a great move that started in their own half following a scrum involving Elliott and Scott Barr. The conversion was missed.

Omagh regained possession almost immediately and went on the offensive once more with a trademark Neil Brown run setting Longwell up for their fourth, bonus point try of the afternoon, which again went unconverted.

For the remaining 20 minutes of the game, Thomond set up a couple of chances, but a Brown interception and good defence kept them at bay during a fairly subdued conclusion to the game.

The Accies attentions now turn to Malahide away on April 6 when again they will be without a host of regulars, but they all know what they need to achieve if their final game of the season at home against champions in waiting, Ballina a week later is to mean anything.

“Our destiny is still in our hands as we go to Malahide next in what is probably the hardest place to go to at the moment,” said Marshall.

“If we were to beat Malahide, and it’s going to be a massive ask, that would be huge going into the last game. With the way the league is set up, we need to win the match.