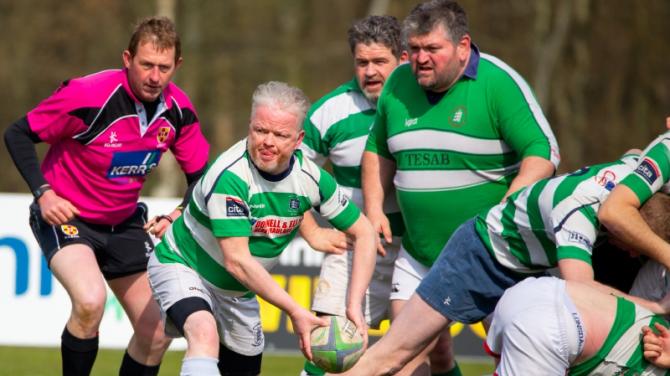 THE rugby fraternity from Omagh, the Fire and Rescue Service and many who travelled from further afield, paid tribute to the late Kenny McEwan on Saturday when an Accies select defeated a NI Fire Service XV by 22 points to 17 in a memorial match and claim the “Beastie Bowl” - the trophy created in his memory, in front of a large crowd at Conneywarren on Saturday.

The game began with the golden oldies taking the stage, with several of Kenny’s ex- Omagh Academy Schools Cup side lining out with former Accies and many fellow Australia Tourists from 1996.

Their opponents, an eclectic mix of experience and well, more experience and some youth, gathered together from Fire Service players from clubs throughout the province included ex-Ireland international Maurice Field.

The game was certainly competitive with younger players being gradually introduced, though at one stage the Accies fielded players with an age gap of almost 40 years, with promising schoolboys lining out with grizzled veterans donning the boots to honour an ex-colleague, friend and team mate.

Despite difficult conditions, there were many vintage moments and fine passages of play from the veterans who rolled back the years to turn out as a mark of respect for the big man.