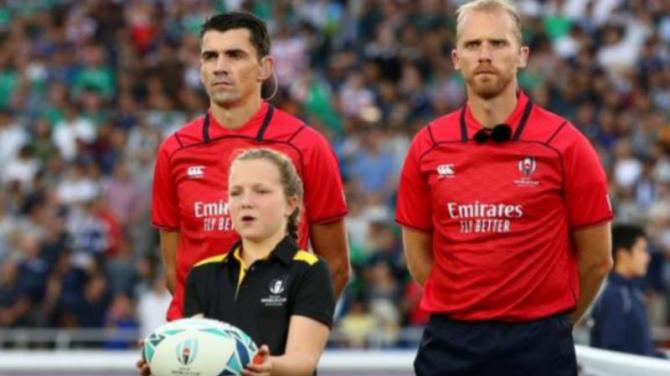 FIVEMILETOWN'S Chris Farrell and Jacob Stockdale, once of Newtownstewart, may have impressed on the pitch as Ireland dismantled Scotland in their World Cup opener in Yokohama on Sunday, but they have Omagh schoolgirl Emily Irwin to thank.

The Omagh County Primary School pupil led out the teams having came up with an Ireland-inspired rap which won her the chance to deliver the matchball to the referee ahead of the Pool A encounter.

Emily was confident she would bring a touch of luck to the men in green and she watched on with pride as Ireland claimed an emphatic victory against a meek Scotland side.

For Emily it was a dream come true. Back in May the unsuspecting Omagh girl broke down in tears of happiness when representatives from DHL - the company who ran the competition - arrived at her primary school one lunchtime to break the news to her.

Emily had sent an inspirational video to the Ireland players through Facebook in which she delivered a creative team-talk in the form of a 'rap'.

A once in a lifetime opportunity, Emily's family decided they would make a holiday of it.

Joining her on the five-day break to Japan were her proud parents Wendy and George and brother Oliver.

It’s fair to say they will have made long-lasting memories.