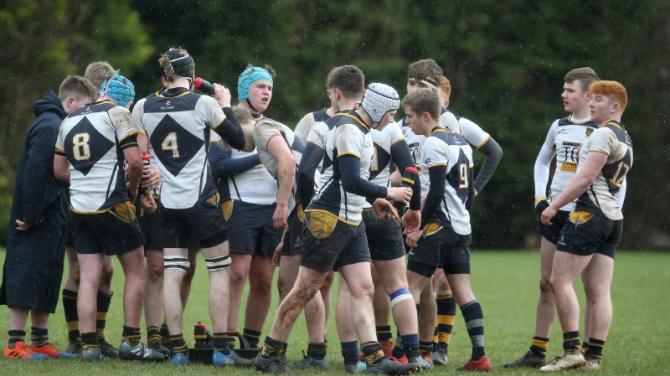 OMAGH Academy’s 1st XV lost an exciting and physical encounter with Tyrone rivals Dungannon by the narrowest of margins on Saturday as they exited the Danske Bank Schools’ Trophy competition at the semi-final stage.

This is an event that neither school felt they should be in and the quality of rugby on display in rank conditions proved that both teams were well above this level.

The game got underway in blustery conditions with Omagh playing with the wind at their backs.

Jake Reid opened Omagh’s account with a long range penalty attempt on 12 minutes. Reid was playing the conditions well and forcing the RSD team to retreat deep into their 22 with some brilliantly placed kicks.

RSD defended with gusto and kept their Omagh counterparts out despite the likes of Daniel Cairns, Joel Smyth and Scott Wilson looking dangerous.

Omagh were unfortunate to lose Harry Stephenson to a head injury midway through the half.

This unsettled Omagh for a period of time and RSD opened the try scoring with a break away score.

Omagh responded immediately. Jack Moore reclaimed Reid’s kick off and Omagh set up camp in the home teams half of the pitch.

Reid was orchestrating things well from half back and looked to release Joshua Kyla and Jamie Wood when gaps would appear.

It was in fact a Kyle bust that set up a series of pick and goes from Omagh’s pack, with Matthew Hunter dotting down for Reid to convert with ease for a 10-5 lead at half time.

The second half was a tetchy affair. RSD now had the wind at their backs and soon had Omagh penned deep in their own half.

A penalty was just rewards for their efforts as they closed the gap to two points.

Omagh’s defence was excellent but it was their ill discipline that was preventing them from making any real head way up the pitch.

RSD kept the pressure on and with 12 minutes to go took the lead with a try under the posts.

The lineout was pulled down by RSD and a number of penalties were conceded close to their line.

With a penalty try looming, Reece Braden forced his way over for a converted try and now Omagh had a two point lead with five minutes to go.

Omagh were trying to see the game out but an unfortunate knock on was gathered by the RSD fullback who hoofed the ball down field. A penalty soon followed for a shot to win the game.

This was missed but as Omagh tried to clear the referee deemed an Omagh player had gone off their feet and another penalty was awarded.

This time the kicker dissected the posts and RSD recorded a one point victory.

A good game of rugby, competitive to the bitter end which demonstrates the commitment these young boys put in. This was a horrible way to lose but the coaching staff couldn’t be any more proud of each of the boys who took the field.