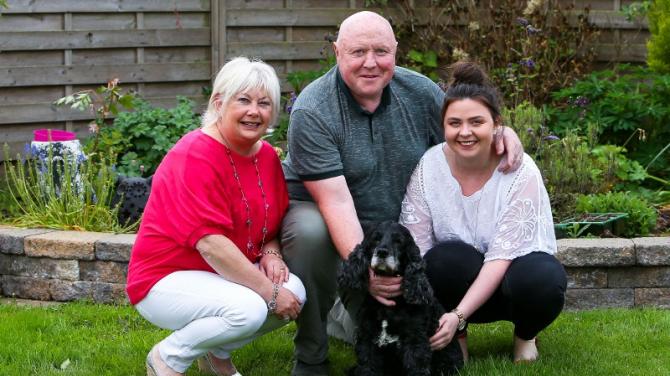 After a hugely successful decade as head coach of Omagh Accies, Phil Marshall has decided to call it a day - but that may not necessarily spell the end of his association with the club.

A rarity in modern sport, Marshall had been in charge for 10 years - a length of time that exceeds any of his predecessors - overseeing one of the club's most successful periods in their history.

But, like many of us, the lockdown restrictions over the last couple of months has emphasised what is really important in life and ultimately, with Marshall preparing to celebrate his 60th birthday next year, he wants to spend more time with family in the future.

Managing a senior club has proven to be an extremely enjoyable but time-consuming challenge for Marshall and he sees himself occupying a less stressful role within the club in the days after lockdown.

"I haven't ruled out doing something else [at the club]," said Marshall.

"It's still an option myself and the club are talking about. I may take on a different managerial role but it has yet to be thrashed out yet.”

He continued: “Ten years is an awful long time to be the head coach of any senior side - it’s well beyond the norm.

“It’s now time to pass the baton on to a younger man. I’m turning 60 next year and the days of wanting to sit on a six-hour bus journey to Cork are coming to an end, I’m afraid!

“I want to be able to enjoy my weekends and do something a wee bit less stressful.

“I have been spending so much time with family during lockdown. I enjoyed the Accies job immensely, but it's extremely time consuming. It’s not just training, but all of the stuff behind the scenes that no one really knows about - the phone calls, messages, emails, planning, booking hotels. There's a lot more to it than training and matches.

“She's the lady captain of the golf club in Omagh and maybe it's time to support her, rather than the other way around.”

Reflecting on a hugely impressive reign, in which Marshall helped transformed the club on and off the pitch, he said it was a time filled with “highs and lows, but mostly highs”.

“There have been a lot of obstacles and things we had to work hard to overcome and to drive the club forward,” he added.

“Everyone bought into the plan and that's what it's all about. If you can get the collective to march behind you it makes life an awful lot easier.

“Success comes from passion. I wanted to succeed and to bring players with me.”

Marshall’s reign started in the best and most dramatic possible way - a 18-17 victory over Ballyclare back in 2010. A winning start to his Omagh managerial career proved to be a turning point for the club and their youthful squad.

“The very first game I was in charge we went to Ballyclare, a team that had beat us home and away over the years without a problem I’m told, and with the last kick of the game we won 17-18,” Marshall said.

“When the players walked off the pitch that day, there was a belief in their eyes.”

Marshall’s intention was to change the club’s style of play and that victory was a real sign of encouragement going forward. It was the start of an exciting journey.

“I was in a very privileged position in that I took up a job with Ulster Rugby working with schools as well,” said Marshall.

“It put me in a great position to drive the local schools towards the club and help to build the youth sections. I found that to be absolutely vital.

“When I arrived at the club there was a missing generation.

“There were a wave of guys in their mid to late twenties who weren't at the club. I knew I had to start with a really young side and therefore play a really quick, dynamic game. It was the only style we could play; we couldn't compete otherwise.

“I’m delighted if you go to the club now and look through the teams, from 18-30, there's at least eight or nine boys from every age bracket. That is the lifeblood of the club.

“While they are obviously important, the first 15 is not everything about the club. You need the boys who want to play for the fours for a bit of craic; you need the 3s as a development team for all the young boys coming through; you need a strong second team with everyone pushing for a first 15 jersey.

“There are the guts of 100 people who need looked after - not just the top end of the tree.”

It was a real privilege for Marshall to watch these young players develop and in turn the club’s fortunes improved tenfold.

“Getting to the cup finals at Ravenhill was a nice experience.

“But promotion to senior rugby was enormous. Two games in particular stand out. To win the Ulster First Division with a late try against Instonians, who had just come down from senior rugby, was massive.

“And then the big one: winning the play-off final in Boyne. I'll never forget that day. All the support staff, committee, the spectators, everyone from Omagh who was connected to the club landed before that game and it was a two-day party.

“For the first time in over 20 years the club had made it back to senior rugby. That was the ultimate highlight.

In a time of great uncertainty in life, one thing that is clear is that whoever is Marshall’s successor has big boots to fill.