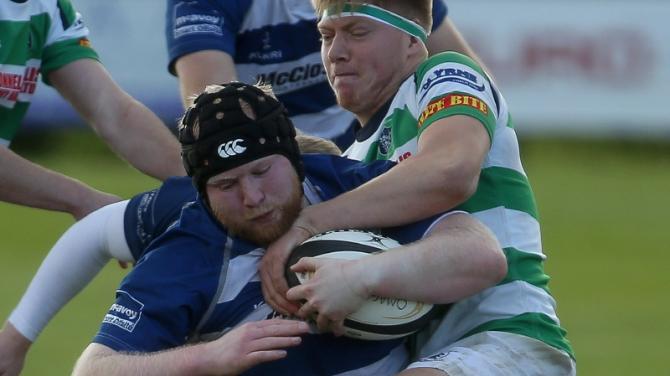 OMAGH Accies boss Glenn Kyle admits the club's focus is now firmly on next season due to the ongoing coronavirus pandemic.

The situation with Covid-19 meant that the plan to get the All-Ireland Leagues underway in January,

It was in late autumn that Ulster Branch decided to call time on the provincial leagues and while they retained some hope of organising some sort of competitive rugby between the turn of the year and the end of May, that looks unlikely at this point.

And that is why Omagh Accies head coach, Glenn Kyle has started preparing for the 2021/22 Energia All Ireland League campaign following the sport’s governing body’s decision not to start those competitions this year.

The IRFU’s statement confirming the decision also said that they ‘and the four provinces will now work with clubs to look at the completion of the Engeria Community Series and to review alternative forms of rugby, such as Lucozade Sport Touch and Volkswagen Tag, which may provide players with much sought after rugby later in the year’.

Kyle believes the chances of the Community Series - which Dungannon RFC are also competing in - being concluded are practically nil and because of that he is concentrating on next season.

“We’re twiddling our thumbs because there is no sport for the forseeable,” he said.

“There’s no date, nothing from the Ulster Branch but I definitely can’t see the Community Series being completed.

“There is to be a meeting with Ulster Branch and all the coaches but I know the general feeling is no rugby this season because you’re only going to have six weeks and I’m not going to bring lads back, train them for two or three games, stop and then start again. All that’s going to do is get injuries. It’s no good.

“So at the minute I’ve done some work for pre-season, that’s all I have got my head into, to bring more knowledge to Omagh for next season.”

The 2020/21 campaign was to be Kyle’s first season in charge at the Thomas Mellon Playing Fields and while it certainly hasn’t panned out how he hoped, he feels until everyone invovled is vaccinated, the following term won’t be able to get underway.

“I’d say the earliest we will be back is May or June but even that is ambitious because of the roll-out of the vaccine,” the Augher man added. “I’m guessing everyone vaccinated then we can play rugby - until that, no rugby.”

Meanwhile, Greg Barrett, chair of the IRFU Rugby Committee, said: “As Covid-19 continues to impact our lives we had to make the difficult decision to cancel the 2020/21 All Ireland Leagues and the women’s interprovincial championship.

“A huge amount of work is on-going, and we continue to look at avenues that may provide players and clubs with the rugby that they love.

“In the meantime, we will continue to innovate and develop education opportunities that can help players developing skills beyond the traditional forms of training for the game. With over 10,000 players signed up to our ‘Level Up’ workshops, we are helping players develop understanding and skills that will stand to them for many seasons to come.

“Our commitment to players and our clubs remains clear – we will continue to adopt a flexible approach to season planning and will proceed with rugby when cleared to do so by government guidelines.”