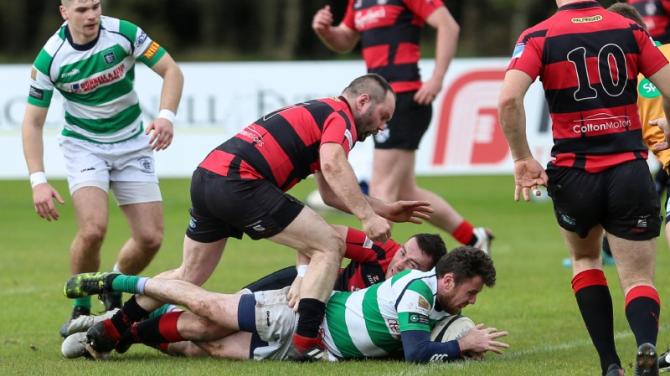 AN away trip to City of Derry (CoD) RFC is never an easy fixture - but on Saturday Omagh Accies made light work of it. This was a fantastic 80 minute display of both skill and a tenacity in defence that was a credit to the club.

In the early stages CoD threw everything at Omagh and with their new head coach Richard McCarter they had some very exciting new plays that really challenged Omagh’s defensive line. Omagh stood firm and from a turnover broke from their own line to halfway where they were awarded a penalty. A quick tap from Kyle Beattie saw some great interplay resulting in Scott Barr scoring underneath the posts. Beattie added the extras to make it 7-0.

CoD went on the attack from the restart but again Omagh’s defensive hunger won them a kickable penalty which Beattie slotted to make it 10-0 to the visiting side. Two minutes later a superb box kick by Taine Lagan bounced nicely for Ryan Mitchell to score – conversion missed. On 33 minutes Kyle Beattie was yellow-carded for what was deemed a deliberate knock-on much to the disgust of the vocal travelling support, but Omagh saw out the remainder of the half to go into the break 15-0 ahead.

In the second half Omagh really went up through the gears and Mitchell got in again after a perfectly executed set move from touchline to touchline on 48 minutes. Beattie continued his fine kicking form as he added the conversion.

City of Derry were struggling to deal with Omagh’s pace and playing style and then when Omagh were in possession around the opposition’s 10 metre line they went down the blindside with Clyde who linked with Longwell. The returning Omagh captain proceeded to beat three defenders to dot down and with Scott Elliott, who had just replaced Beattie at out-half, adding the extras the score was now 29-0. Then on 60 minutes, Elliott spotted an intercept opportunity which he duly accepted to go in from halfway and convert by himself.

With less than 10 minutes left to play Omagh’s offloading game was a joy to watch and Ryan Mitchell got on the end of some great interplay between forwards and backs to complete his hat trick. Elliott converted to take the score to City of Derry 0 Omagh 43.

Omagh continued delivering an 80-minute performance when they were awarded a penalty just outside the opposition 22. With it being the last play of the game Elliott spotted the space in behind, chipped the defence, gathered and scored. He then added the conversion to his superb individual effort to take the final score to City of Derry 0 Omagh 50.

The substitutes (P. Ewing, R. Hemphill, J. Duff, L. Kane and S. Elliott) must be mentioned as they made great contributions when coming on. With the All Ireland League returning this Saturday Omagh will be pleased with their performance and the result but know they will have to produce the same if not better next week if they are to stand the chance of getting a result away to a strong Skerries RFC side.

This weekend the 1st XV begin their 2021/2022 All Ireland League campaign with a difficult trip to Skerries RFC.

The youth host Portadown and the minis play their first games of the season away to Enniskillen. All support is greatly appreciated!