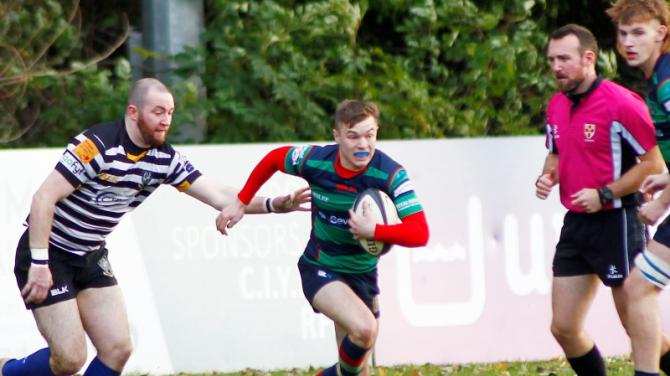 CLOGHER Valley travelled to the palatial surrounding of Belmont in Belfast on Saturday for their eighth league game of the season. Thankfully the poor conditions en route had dissipated and by kick off it was bright but breezy.

Twelve minutes in Clogher opened their account. A penalty in the CI 22’ metre area, while all were expecting a goal attempt, Armstrong tapped and went. He made ground before off-loading to Bothwell who scampered over for the first try which Armstrong then duly goaled.

It was nip and tuck for a while, both sides have inventive backlines but up front the Valley eight held all the aces, particularly in the scrum. Despite the obvious height and weight advantage that CI held they struggled to contain the rampant Valley front eight.

On the half-hour mark CI converted a penalty to get three points on the scoreboard.

Minutes later the Valley struck back. Forty metres out the visitors opted for a scrum instead of a penalty. With the CI pack being driven back and infield Armstrong broke blind to find winger Mills. Mills made inroads before switching play back inside to Haire who raced in for the second try with Armstrong again adding the extras.

It was the pack again who provided the third try just before the break. A period of pressure led to a five-metre scrum. The CI pack all but disintegrated as the Valley powered over for No8 Smyton to touch down and Armstrong to goal. 3 – 21 lead at the break was a comfortable position to be in for the visitors.

Upon restart it didn’t take long for the Valley to push further ahead. A great passage of play saw Bothwell through a gap before off-loading to Armstrong who proceeded to score his first try and more importantly the Valley’s fourth and bonus point try. The skipper again obliged with the extras.

CI were better in the second period. Their pack produced more possession and their backline were always a handful to handle. They hit back with a good touchdown which was goaled to take their tally to ten points.

As they attempted to build further pressure Armstrong intercepted and raced in from forty metres for a try which he duly converted.

Hopper and Armstrong left the field in the third quarter of play both carrying niggles and as the Valley have a quarter-final of the All Ireland Junior Cup on the horizon it was the right call.

Primrose came on in the front row while Mills reverted to the centre and Brown replaced him on the wing.

Another flowing passage of play resulted in Bothwell cleverly chipping the covering defence with Haire chasing down and touching down for the final Valley try of the day. This time Maxwell added the conversion to bring the Valley total to forty two points.

Late in the game CI added another try after the Valley didn’t keep their width in defence, it went unconverted and left the final score at 15 – 41.

This week, all senior sides get a break, the season then continues for the 1st xv with a home quarter-final of the All Ireland Junior Cup against Dromore on November 20.