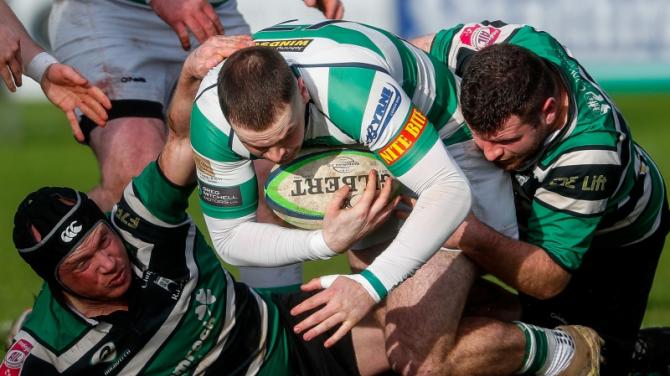 OMAGH Accies welcomed Clonmel to the Thomas Mellon Playing Fields on Saturday hoping to come away with a home win, but the visitors proved the teams fighting for survival are as dangerous as the rest in this very competitive league.

Omagh received the kick-off and couldn’t get out of their own 22 for the first quarter. This led to them conceding a penalty which was converted by Clonmel to send them into a 3-0 lead after 10 minutes.

Omagh played some good, entertaining rugby but just before they looked as if they were going to score a knock-on or turnover thwarted them. With every mistake that Omagh made Clonmel kicked and chased which caused Omagh problems all day. Omagh struggled to exit their own half as they ran everything when kicking would have been a much simpler and easier option.

Before half-time, Omagh failed to exit once again which gave Clonmel an attacking lineout. After some pick and drives the visitors got the only try of the game to lead by eight points to nil at the break.

Omagh had many opportunities to score in the second half but inevitably a mistake led to them turning the ball over and releasing the pressure on the visitors. Despite this Omagh did have their chances to win the game as Scott Elliott converted two penalty attempts to leave them trailing by only two points with around 10 minutes to go. Two further long-range attempts were to go off target, the latter striking the post with Clonmel gathering and going through a few phases before kicking the ball out and celebrating an 8-6 away win.

A poor performance from Omagh who now have two free weekends to prepare for the away trip to Bruff where they will hope to make sure this type of performance doesn’t happen again.

This weekend only the club’s mini section are in action due to the Six Nations beginning as they host Clogher Valley Minis. All support will be greatly appreciated!