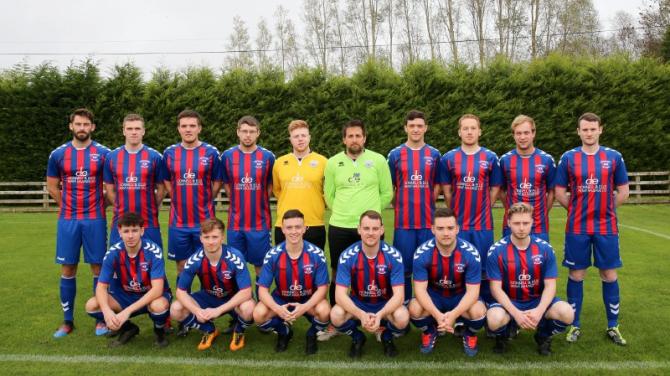 IT was a memorable result to mark a special day in Mountjoy and its football team, Mountjoy United.

After the official opening and dedication of a new play park at the clubhouse in the village, United were then presented with a new kit and the players marked the occasion in style, running out comfortable 4-0 winners against a competitive Castle Star side, in front of a large turnout of supporters on Saturday at Lisnagirr Road.

It feels like a new era at Mountjoy, and if this result is anything to go by then the future is exciting.

After some early intense pressure from the visitors, United began to exert their authority on this second round tie before displaying their ruthless side, scoring twice before the break, and two more after the restart for good measure.

What pleased manager David Gilfillan most is the number of different goalscorers he now has to choose from. There were four different names on the score-sheet on Saturday: Derek Matthews, Gregory Dickson, Michael Reid and Lee Frazer. Indeed, Gilfillan has something of a selection headache when his side travel to Portrush in the next round of the cup.

"It was another good result - it was a good cup game, actually," said Gilfillan. A decent performance and through to the next round, so that is all we really wanted.

"We reached the fourth round last year, we would like to target the fifth round this time. By all accounts though an away game in Portrush isn't going to be easy. They are a decent side and have home advantage."

Gilfilan continued: "Saturday was our first game in three or four weeks, so we were a little bit rusty to begin with. If anything, they started the better side. They came out of the traps quickly and came at us, hitting the woodwork twice in the first 25 minutes. But we settled down, started playing our football and we got the first and second goal, and then we were in control for the rest of the game. It wasn't an easy start, though.

"We were poor to begin with, and to be honest they should have scored with one or two of their early chances. But we scored with our chances, so that was the difference really - we were more clinical.

"We have now won three on the bounce, and the goals have been well spread out. It's positive that we aren't just relying on player to score. On Saturday we had four different goalscorers, and in the last week we had three different goalscorers. The whole team is chipping in.

"There was a good turnout to watch, the weather stayed good and the result was a great way to mark a memorable day. We want to kick on from here."

It could have been a very different outcome had the visitors took their early chances. In the first instance a striker's shot came back off both posts before being cleared and another effort was diverted onto the crossbar by goalkeeper Lee Nesbitt.

And having ridden their luck somewhat, Mountjoy edged in front in the 25th minute, when Matthews finished a good team move involving Andrew Gilfillan and Dickson.

The hosts doubled their advantage five minutes before the half-time interval when Frazer’s through-pass picked out Dickson who finished with aplomb.

Nesbitt was forced into another good save after the restart, but then Mountjoy took control, adding two further goals.

For the first, Matthews released Reid who coolly converted, and a short while later Frazer netted a spot-kick after Reid was upended in the penalty box.

Mountjoy can now concentrate on league matters for the next few weeks, with Tummery and Lisbellaw to follow.

"And now we have three or four difficult league games coming up,” said Gilfillan.

“It's not going to be easy on Saturday against Tummery, we start the game as underdogs but we aren't afraid and we have confidence in the side. I won't put too much pressure on the players.

"Lisbellaw are next, so we have two tough games coming up, but we two games we need to take something from."