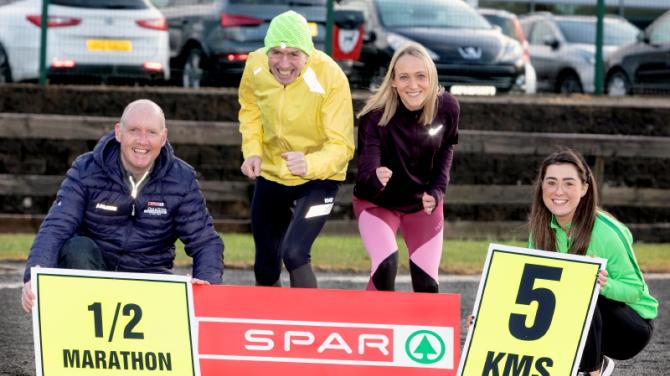 REGISTERATIONS are now open for the 31st SPAR Omagh Half Marathon following the launch of the iconic running event.

Representatives from title sponsor SPAR, event organisers and local athletes gathered at Omagh Leisure Centre to formally announce the details for the popular event which is now a firm fixture on Athletics Northern Ireland’s running calendar.

This year’s race will take place on Saturday, March 28, at the earlier time of 10am and is expected to be the most popular event to date with thousands of runners, joggers and walkers set to compete in both the Half Marathon and 5K races.

To secure a place, all runners are asked to pre-register for the event online at sientries.co.uk before March 24. The registration fee includes a long-sleeved technical top for all Half-Marathon competitors, a commemorative medal for all finishers, chip timing, official race pacers and post-race refreshments and goodie bags provided by title-sponsor SPAR.

As well as being a great running event, the Omagh Half has always been a great family day out and this year’s race promises to deliver even more fun. There will be live music and entertainment throughout the town during the race, with local residents encouraged to come out and support all of the competitors.

Race director, Michael Ward said although there are still 10 weeks to go, preparations for the race are well advanced.

“As the SPAR Omagh Half approaches, the Omagh Harriers race committee are working tirelessly to ensure they deliver the best possible event and experience for the thousands of runners that will visit Omagh on March 28,” he said.

“We have witnessed this event grow enormously over the past 20 years. There is an upturn in the amount of people chasing a healthier lifestyle and with the pace of everyday living, running is a great way of meeting new friends and clearing the mind.

“The Omagh Half has grown to become one of the fastest Half-Marathons in the country with new course records set by Stephen Scullion and Ann-Marie McGlynn in recent years. With over £5,000 in prize money up for grabs, we hope to attract many of the biggest names from the world of Irish running.

“On behalf of all the organisers, I’d like to pay tribute to our title sponsor SPAR who have worked closely with us to grow and develop the race into the popular event which exists today and look forward to continuing this partnership for many years to come.”

“Of course the Omagh Half isn’t just for competitive runners”, Michael continued. “Our annual 5K run also attracts huge numbers, right through from primary school children to the more experienced. We have found that many of the runners that took part in our 5K race progressed and stepped up to the Half Marathon distance (13.1 mile) in later years. For those that have never participated in a big event, I’d encourage you to get on the trainers, get out and walk, jog or run the course and enjoy the magical atmosphere on Saturday, March 28.”

Bronagh Luke, head of corporate marketing at the Henderson Group, owners of the SPAR brand in Northern Ireland, confirmed that SPAR was thrilled to be back on board as title sponsor for this year’s Omagh Half.

“The SPAR Omagh Half is now one of the key events in our calendar, and we’re proud to play a role in delivering this great event. SPAR is passionate about promoting health and fitness initiatives throughout Northern Ireland and eager to support such events however we can.

“I hope to see as many people as possible competing in either the Half Marathon race or the 5K and take the opportunity to raise some money for all the brilliant charitable causes that the Omagh half supports.

“Even if you can’t participate, the SPAR Omagh Half is a great family day out and we’re looking forward to being in Omagh on the day, encouraging all of the runners and handing out some great prizes.”