'RALLY NI': The return of the Assembly 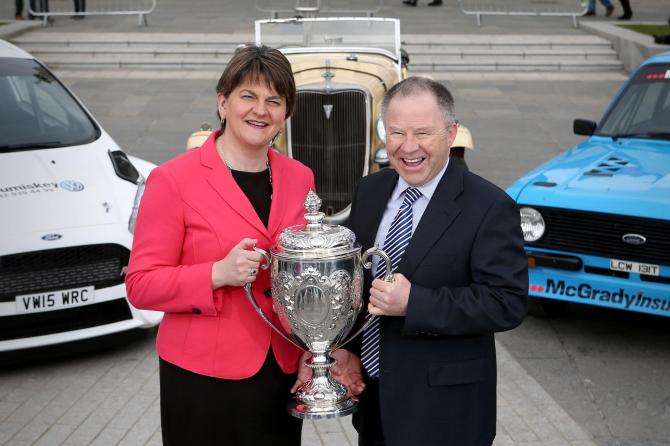 First Minister Arlene Foster and respected motorsport figure Bobby Willis have been central to securing both the Intercontinental Rally Challenge and European Rally Championship. Is the WRC next?

PART TWO of Jason Craig's feature looks at the importance of the Assembly at Stormont Buildings in Belfast returning following its collapse over the Renewable Heat Incentive scheme.

Part Two: The wheels are turning

On January 20th this year, following make-or-break talks brought about by the UK and Irish governments – the co-guarantors of the Good Friday Agreement – the DUP and Sinn Fein restarted their mandatory coalition. WRC talk resurfaced in motoring circles but was this another false dawn?

In truth, those who really want to see the World Rally Championship return to the province for the first time since 2009 – and there are many, if truth be told – could not stomach another 'so near and yet so far' scenario.

Happily, the current feeling at Stormont Buildings – the backdrop for the opening Super Special Stage from Rally Ireland in 2007 – is ‘How quickly can we make this happen?’

If the new Economy Minister, Diane Dodds MLA, gets her way it could be 2021.

“A proposal is being considered for Northern Ireland to host the UK round of the 2021 World Rally Championship,” she said. “Officials right across government are currently engaged with Motorsport UK to consider the feasibility of hosting of the UK round.

“Tourism Northern Ireland is considering funding applications for events in 2020/2021, as well as a number of global events that could be hosted in Northern Ireland in future years. Funding of these events would, of course, be subject to affordability.”

If it is a return on investment Northern Ireland PLC wants the WRC delivers in shovelfuls. The latest set of figures issued by the WRC reveals it had a cumulative television audience of 836 million in more than 150 countries. History shows Tourism Northern Ireland likes to err on the side on caution, choosing instead to hide its light under a bushel. It has confirmed however that a WRC bid paper is currently sitting on its desk.

Despite having its ties firmly rooted in the UK mainland, there is little in the way of scepticism towards rotation.

Iain Campbell, Wales Rally GB’s Clerk of the Course, said: “It is no secret that there have been various conversations over a period of time about the World Rally Championship visiting Northern Ireland.”

Malcolm Wilson – the boss of M-Sport – has fond memories of the Irish lanes and the challenges they presented, especially during his title-winning British Rally Championship campaign from 1994.

“The world doesn't know how unique Ireland is or how demanding it is but I do. At the moment there is a lot of competition for a place,” he said. “The manufacturers have, just recently, been in discussions and we feel thirteen rallies is the limit.

“It's not going to be easy, especially after Paraguay announced that they plan to run a candidate event this year in the hope that they will be handed a place in 2021,” he added.

Tomorrow we speak to leading drivers from the UK and Ireland and ask if rotation is something they favour.