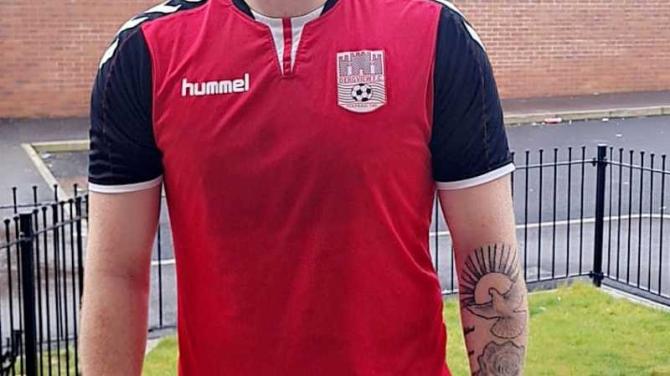 A DERGVIEW footballer is lacing up his running shoes every day through the month of January to raise money for two great causes.

Sean McCarron, who signed for the Castlederg-based club last January, has committed himself to running 5k from New Year's Day to January 31.

The initiative is three-pronged: to raise money for charities close to his heart, to keep fitness levels up - and to beat the frustration of another lockdown.

McCarron has not kicked a ball in the Championship this season due to the ongoing coronavirus restrictions on sport not classed as elite.

"It's sore on the body, but you just have to keep the head down and keep running," laughed McCarron, who explained the idea was generated in a WhatsApp group with his friends.

"Everyone is a bit frustrated with lockdown, so someone threw this idea in.

“It's a challenge, it will get us out and about, and we're trying to raise money at the same time.”

It is proving much more difficult than McCarron perhaps ever anticipated, but he is enjoying the challenge and insists it is helping his mood.

“We are not really trying to set a time or anything,” he said.

“But in the first couple of runs I was coming in at a good time - at about 24 minutes - however, then I began to feel it taking a drastic hold on my body.

“The most important thing is to get the run done without stopping.”

“Long distance is not my strong point,” he laughed.

“I would definitely be more of a sprinter! My times are up and down; one day you’re feeling fatigued and the next you’ve got a wee extra boost to motor on.

“I get up and do it first thing in the morning, but I’m feeling sore everywhere.

“One day it could be the calves, then it’s your quads and hamstrings. I was feeling my lower back, but then the next day I’m feeling brand new.

“I’m using the foam roller and drinking plenty of water, just to keep my body right.

“It’s definitely a different challenge to the football, it’s more testing. But don’t get me wrong, it is enjoyable. When you put yourself through that strenuous work, the reward is great at the end, and you do feel fantastic.”

The added bonus point is that the running will leave McCarron feeling sharp should competitive football return any time soon.

“To be honest, that was probably one of the main reasons why I wanted to do it,” he continued.

“It’ll keep me ticking over during lockdown. It’s hard times for everyone - we’re used to training and playing - and this challenge is keeping me right mentally.

“We have been in training for seven or eight months with no end goal, and it’s hard to get motivated when the start of the season is constantly being postponed.

“I enjoyed Christmas, but I have to thank my friends for putting this idea out there because it’s kept us all active.”

McCarron is helping to raise money for the Foyle Hospice and Foyle Search and Rescue.

If you would like to donate, you can do so by PayPal. The email address is garymcfadden23@outlook.com