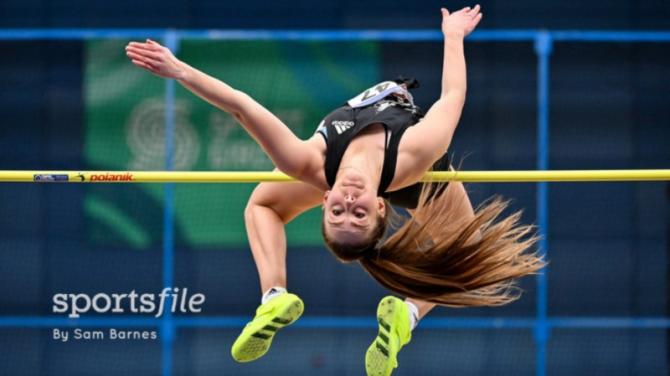 CASTLEDERG athlete, Sommer Lecky, hopes there's much more to come after clinching an award at the Irish Micro Meet in Dublin.

Sommer, of Finn Valley AC, cleared 1.75m to win the High Jump event at the weekend, and the former Strabane Academy pupil admits it was a relief to blow off the cobwebs after a frustrating six months without any competitive sport.

“I haven’t been out jumping for five or six months, so it was great to get back out competing,” she said.

“It was great that Athletics Ireland were able to get an event on. It was organised all very last-minute, but I was never going to say no to a competition! I had been waiting on an opportunity like this for ages.”

A lack of time to prepare for the event meant Sommer didn’t perform to her full potential - but it was still more than enough to claim the award.

“I was a wee bit rusty, but it was still great to transfer my training into work in a competitive environment,” she continued.

“Nothing compares to the adrenaline buzz at a competition. It was just good to be back jumping with someone else.”

She continued: “I was happy with my run, but I know that I can jump a lot higher. It was a wee bit frustrated because I was hitting the bar on the way up, but that’s just the way it goes sometimes and I think a lot of the boys had the same problems.”

With Covid-19 wreaking havoc in the world of sport, it has been a trying year for Sommer. But she admits it hasn’t affected her motivation.

“I never struggle with motivation, I always try to look at the bigger picture,” she said.

“I really enjoy training, so there is never a lack of motivation.”

And with the European Athletic U23 Championships possibly taking place from July 8 to 11 in Norway, Sommer has plenty to look forward to.

“That’s what I’m aiming towards with my training at the moment,” she said.

“Hopefully they are able to take place - my own personal opinion is that they will go ahead.”