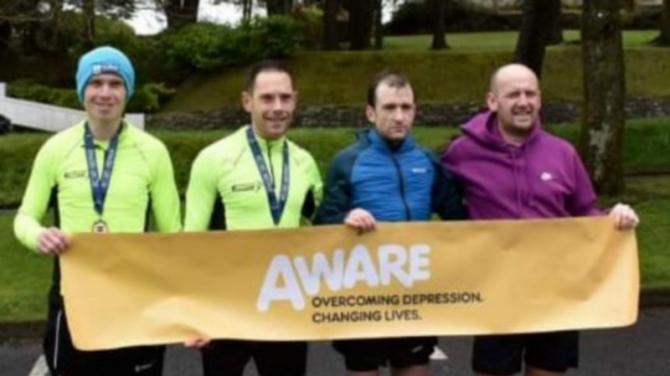 FOUR Omagh runners were the talk of the town on Sunday when they completed a marathon in aid of the charity AWARE.

Their aim was to raise as much as possible for the mental health and wellbeing charity, and thanks to the generosity of the local community, they have generated almost £4,000 so far.

Remarkably, two of the runners - Richard and Ryan - achieved this incredible feat. They are now part of a proud elite club made up of just one per cent of all runners, who can boast completing a marathon in just under 180 minutes.

For Gareth and Sean, they finished in a fantastic time, but agonisingly missed out on the target, coming over the line in 3:01 and 3:05 respectively.

Speaking after the event, Ryan said the day was a ‘dream come true’ for him. It was all worthwhile after 13 weeks of hard training.

“The lead up to the run had a great structure, thanks to Seanie Meyler, and I felt that I was getting stronger week by week,” said Ryan.

“My motto is ‘believe to achieve’ and never did I doubt that you get out what you put in.

“I never gave up throughout. Yes there were tough days with tired legs, but I kept thinking of the end goal.

“The race itself was like a dream. I felt confident, determined and in the zone throughout and as a team we had great support for each other and had each other’s backs.

“The day was electric, from the support we got and the money raised for an amazing cause.

“It was a dream come true and a tick off the bucket list.”

Gareth admits that he was disappointed not to break the three-hour mark but he is still very proud of his achievement.

“Unfortunately I just missed out on the three-hour target,” he said.

“I had a mile to go and my legs just left me. Fortunately there were a few people on the side of the road supporting us and they ran with me to make sure I got to the finishing line.

“It is hard to take, but I’m going to take the positives out of this experience. It was a massive PB for myself as I was 13 minutes quicker than I ran the Dublin Marathon in 2019. So I’m still very happy with it.

“The people out supporting us the whole way round, and the donations we received... it was all just incredible. I was nearly in tears seeing the amount of people out cheering us on, and that really helped us through. It wasn’t a great morning - it was raining and windy - but seeing everyone out supporting us really did help.

“Looking back now a couple of days later, you realise that all of those people were out there for the four of us, just doing something that we loved doing.”

If you still wish to donate to the cause, visit www.gofundme.com/f/4-under-3