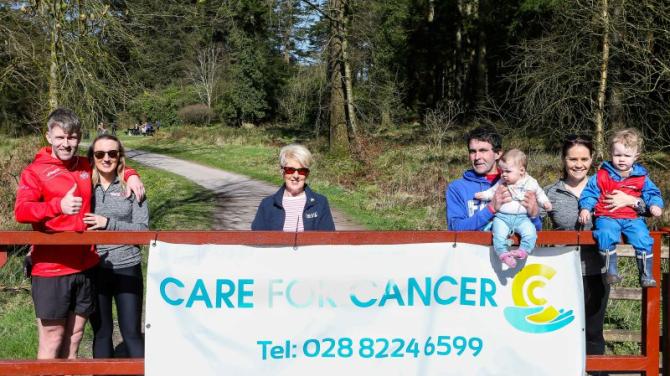 IF you have ever climbed to the top of Knockmany Forest Park, you will know it takes a great deal of effort to do it just once. So, just imagine how exhausting it must be to run to the peak a total of 13 times - without a break.

This is exactly what Eskra brothers and dedicated athletes Conor and Joe McCarroll managed on Saturday, when, supported by their Knockmany Running Club team mates, they managed to run a total of 26 miles - and all for a great cause.

The sunshine beamed down on the brothers as they repeatedly climbed up the Cairn and back down in a bid to raise money for local charity, Care for Cancer.

They started at 10am and showed no sign of stopping until they completed the epic challenge, with Conor’s two-year-old son Matthew joining him for the last 20 metres!

Speaking to the Tyrone Constitution on Monday, Conor said it was a day that will live in his memory forever.

“There were a good number of people out there in support of us,” commented Conor, who is the founder of Knockmany Running Club.

“They were brilliant and helped pull us up the hill. This was the first time I have ran a marathon since my children were born, so it was lovely to have them there at the end.

“The people around the Clogher Valley area and the members of Knockmany Running Club always get behind you.”

An experienced runner with plenty of races under his belt, Conor said this particular challenge ranks at the top of his achievements.

“You’re always thinking of the people you’re helping, and that gives you an extra wee lift.

“I would place this run even above any of the fast marathons I have ran.

“There are far better memories from Saturday. Sometimes in a marathon you’re fixated with times and you miss the occasion and the important stuff.

“But this one here I’ll never forget. It is definitely at the top of my list of achievements.”

Believe it or not, the brothers found coming back down the hill more difficult than climbing up, particularly towards the end.

“The quads were getting smashed up,” said Conor, who is 10 years his brother’s senior.

“My brother is a bit younger and a bit stronger and he kept us at a steady pace. He kind of pulled me along towards the end. The terrain at Knockmany is tough and you have to get the pace right. There are at least three real tough stretches on that mile uphill.

An amazing total of over £700 was collected on the day, which will go along nicely with the £5,700 already raised on the JustGiving page online.

Asked why he wanted to raise money for this particular charity, Conor said: “Our auntie Betty is a volunteer for Care for Cancer. A lot of charities have had to do without fundraising during the pandemic, so we wanted to do our bit. It couldn’t have been easy for cancer patients this year.

“When people were so generous with their money, we just had to complete the challenge.”