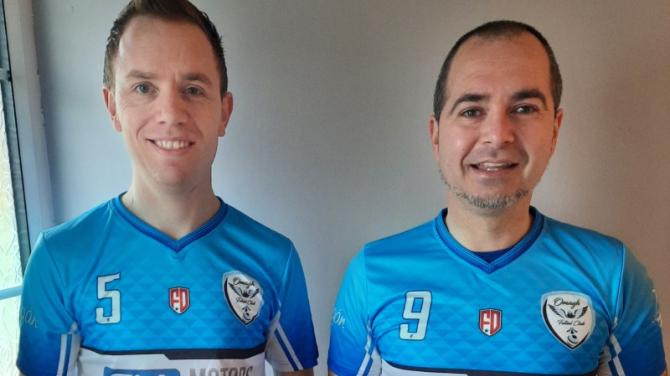 OMAGH Futsal Club have been announced as successful applicants to ‘Project Re:Boot – Team Up’ as part of the National Lottery-funded Supporting Sport to Build Back Better programme.

The programme enables sporting organisations to deliver new innovative and projects as clubs emerge from Covid-19 with an ambition to be stronger and more resilient than ever.

Omagh Futsal Club chairman, Martin Cassidy, says: “This is amazing news. We are the only project in the Fermanagh and Omagh district to be awarded the funding.

“A lot of hard work and thought was put into the application.

“The funding came at the perfect time. I knew it was an opportunity we couldn’t miss out on.

“When the pandemic struck the club was on a high, but it nearly wiped us out.

“We learned the club needs to grow from the ground up in order to be sustainable in the long term.

The Futsal for All project will see Futsal Coach Education opportunities for 30 local coaches to give them the confidence to start Futsal programmes within their clubs, schools and community setups. Futsal Referee Introductory Award will allow upon completion of the course eligibility to referee in the Northern Ireland youth and senior men’s/women’s.

“Professional Football clubs are now dedicating a big part of their coaching programme to Futsal and a number of the best football players in the world put playing Futsal as a child down as a huge part of their development.

“This project will bring this exciting sport to the masses across the west.

“By setting up an academy, school camps and other participation opportunities we can introduce children to a new sport that can be played year round no matter what the weather. No more games called off because of a flooded pitch. There will be a pathway from junior to senior futsal.

“This gives the opportunity of competing in the Northern Ireland Futsal League whose winners play in the UEFA champions league.

“Players can also represent their country playing for the national futsal team.”

Walking Futsal will also be delivered, different to regular Association Futsal in many ways and is aimed at the over 50 age group.

Games are played at a slower pace, thus reducing the threat injury, this allows people who have loved the sport all their lives to once again safely get back to playing and also introduces the sport to people who perhaps have never considered playing before.

Working in partnership with Omagh Ethnic Support Group the club will provide participation opportunities to the BAME communities in Omagh. The project will also offer local sports clubs volunteer development training. Clubs can improve capacity by learning how to recruit, retain and reward volunteers. The capacity and skill set of the Omagh futsal committee will also be increased by completing safeguarding and first aid training therefore providing a safe environment to manage delivery.

To keep up to date the projects please follow Omagh Futsal Club on social media or you can contact them via email omaghfutsal@gmail.com