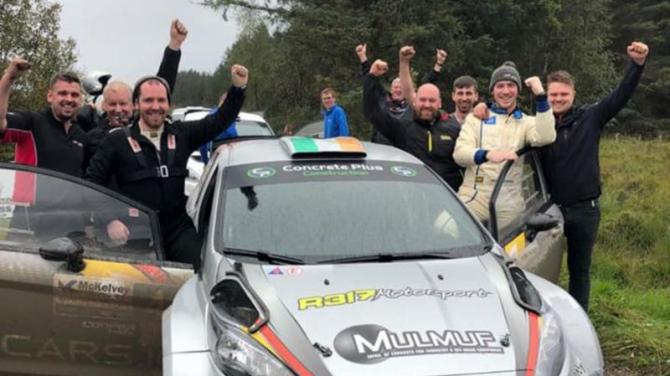 PATRICK O’Brien claimed his first ever win behind the wheel on Saturday when he produced a dynamic drive to seal victory in the Omagh Motor Club McKelvey Construction Bushwhacker Rally.

The talented 24-year-old from Mountfield, who had brother Stephen on the notes, was at the top of the time sheets from the second stage on - Victoria Bridge driver, Jason Mitchell and Donemana co-driver Peter Ward won the opener before a heavy landing and subsequent radiator damage on stage three ended his participation.

In the end, Dromore’s Cathan McCourt and navigator Liam Moynihan, who went on to finish fifth overall at the Cork 20 International on Sunday, were second, just over seven seconds adrift of the Mountfield man, and Ballygawley’s Vivian Hamill and Andrew Grennan took advantage of Garry Jennings’ gearbox issues to take third and relegate the Kesh man and Drumquin co-driver Sean Ferris to fourth.

Donemana’s Niall Devine and Liam McIntyre were ninth overall in his Mitsubishi Evo and Derek McGarrity and Paddy Robinson rounded out the top 10 in their WRC Ford Fiesta.

The two-wheel-drive battle turned out to be an epic encounter with David Crosena and Emmett Sherry’s Mk II Ford Escort beating Frank and Lauren Kelly’s ‘Baby Blue’ to the title. The Moy father and daughter crew had only 0.2 of a second to spare over Fivemiletown’s Shane McGirr and Ballygawley’s Denver Rafferty in ‘The Scrapbox’ Toyota Starlet in third.