Accies through to Senior Cup semi-final 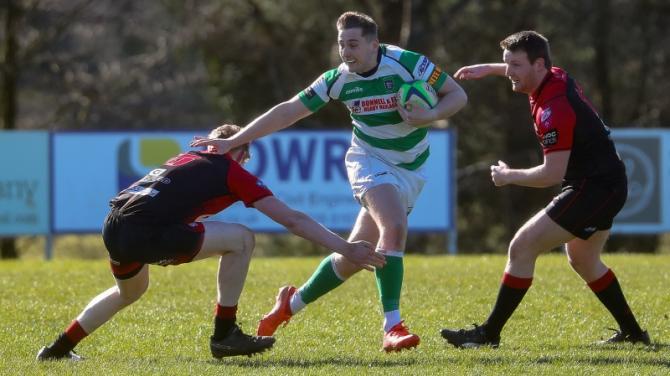 A HOME Senior Cup quarter-final proved a very entertaining encounter as Omagh’s All Ireland League focus switched to their last opportunity for silverware this season having lost out on the top 4 in AIL 2C.

Omagh started really well as they played from touchline to touchline and then it was Luke Hanson who opened the days scoring as he cut straight through the middle of the visitor’s defence to go under the posts.

Not to be outdone Rainey responded by putting Omagh under pressure in their 22 and they converted a penalty after 20 minutes to take the score to 7-3.

The concession of this penalty seemed to wake up Omagh as they returned to their expansive style which saw Dean Kane make a break from the halfway line, beat two defenders and go in for a brilliant individual score.

Omagh’s scrum was in the ascendency all day and with Rainey back pedalling the impressive Matthew Clyde picked and went, gaining some valuable yards on a number of occasions.

After one such Clyde bust, Joe Duff made a break and touched down to leave the score Omagh 21-Rainey 3 at the break.

At the start of the second half Rainey had a lineout in Omagh’s 22 and after some confusion in the hosts defence Rainey went in for their only try and last points of the day.

The visitors did make plenty of line breaks all day, but the final pass seemed to go astray several times.

With the score at 21-8, Taine Lagan entered the fray and went on to score one of his trademark tries which was again converted by Beattie to put Omagh into a commanding 28-8 lead with 15 minutes remaining.

The game would fizzle out, ending 28-8 to the hosts and Omagh had their names in the hat for the semi-final draw on Monday at Ravenhill where they were rewarded with a trip to City of Armagh RFC on April 16.

A solid, entertaining Omagh performance but they are well aware of the threat league leaders Enniscorthy will pose this weekend as they make the long trip to the Thomas Mellon Playing Fields for the return of the All Ireland League.

Kick off is at 2.30pm and once again all support would be greatly appreciated!

Tries: One. Pens: One