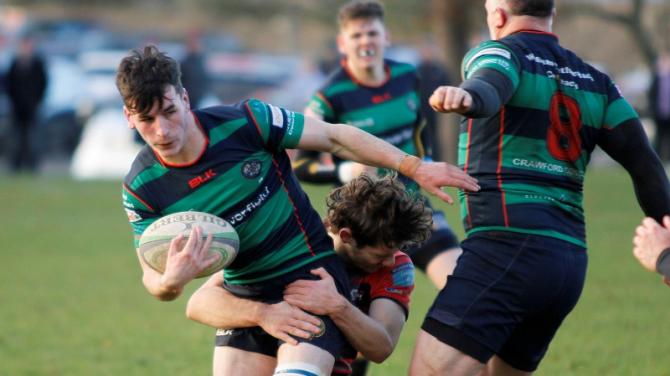 CLOGHER Valley Rugby Club (RFC) will contest their second final of the season when they play Armagh second XV in the Millar McCall Wylie Junior Cup this weekend.

The Valley overcame Cooke in the semi-final in a hard fought contest.

Armagh RFC will be attempting to take home both the Senior Cup against Queen's and the Junior Cup, with both matches to be played at Kingspan - the home of Ulster Rugby.

Valley and Armagh seconds have met earlier in the season with the Valley coming out on top, however, according to the first team manager Richard Haire: “This will not be a walk over."

He continued: "Armagh are a great side and they will push hard to become one of the few sides to win both the Ulster Senior and Junior Cup on the same day, as will Clogher Valley, who are the current holders of the All Ireland Junior Cup.

"We will be pushing hard to become one of the few sides to have held the Ulster Junior Cup and the All Ireland Junior Cup in the same season."

Skipper Paul Armstrong - who has been also representing Junior Ulster in the Interpros alongside fellow Valley players, Neil Henderson, David Maxwell, Recce and Calum Smyton - has a great deal of respect for the Armagh side.

“They will want to win to have that double celebration - we must not underestimate this side," he said.

“The Valley were rusty in their performance against Cooke after the five-week gap between the end of the season and the semi-final,” said coach Stephen Bothwell.

“The fact we are the holders of the All Ireland Junior Cup will mean nothing when we step on the pitch. We have a job to do and we must focus with the same preparation for this game as the last final."

Club president Eric Mitchell added: "I am extremely proud of what the club has achieved this season.

"It is not just the first XV, but the seconds, the U16s and the U14s who have also reached cup finals.

"Across the club, there has been fantastic success. Our third XV finished third in their league, the youth, both boys and girls has brought the club back to life with their energy and enthusiasm.

"And who can forget the minis, who turn out regardless of the weather and breathe life into this club.

"Then there is the rugbees, with 120 three to seven-year-olds enjoying what rugby as a sport can offer."

Also looking ahead, Eugene McKenna said: "We are looking for another great turnout from the Valley supporters.

“Armagh will be there is big numbers to see both of their sides, so hopefully the Valley supporters will be there to give us the same support as they did in January."

"It makes such a difference when the crowd gets behind you at these big finals," continued the Valley second row.

"I look forward to these big matches, running out of the tunnel at Kingspan is a fantastic feeling and that is something I want to repeat."

Kick off at Kingspan is at 1pm on Saturday, May 14.

Tickets are available via Ticketmaster.